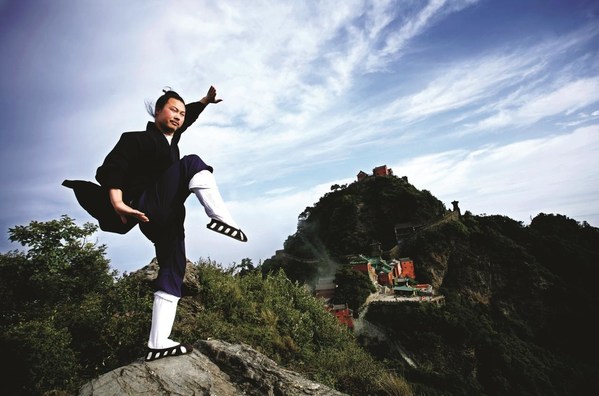 DANJIANGKOU, China, April 13, 2021 /PRNewswire/ — On April 12, the Chinese Ministry of Foreign Affairs held a special global promotion for Hubei Province, central China. The Wudang Mountains, the holy place of Taoism, once again made a stunning appearance in front of the world.

In the meantime, the first "2021 Wudang Mountains Intangible Cultural Heritage Temple Fair" is underway in Yuxu Street, according to the Wudang Mountains Tourism Special Economic Zone Working Committee. Powerful martial arts performances, graceful folk dances, and dazzling Han Chinese costume show were all presented. The event will last until May 6. People in the city of Shiyan invite tourists from home and abroad to visit the Wudang Mountains, joining the temple fairs, enjoying the beautiful scenery and practicing martial arts.

The natural landscape of the Wudang Mountains is so magnificent that it is known as "the most beautiful mountain in the world." The Wudang Mountains has the most complete and largest existing Taoist architectural complex in China. These buildings make full use of the terrain characteristics, and build the palaces among the peaks, mountains, slopes, rocks and streams, reflecting the fine tradition of "harmonious coexistence of man and nature" in Chinese architectural art, and showing the idea of "Tao following nature and the unity of man and nature" in traditional Chinese culture. The Wudang Mountains is thus known as "the museum of ancient Chinese architectural achievements" and "the Forbidden City hanging on cliffs".

Wudang Wushu is one of the main schools of Chinese Wushu. It is a natural combination of martial arts and health preservation methods. It not only has profound traditional Wushu culture, but also contains exquisite scientific reasons. It applies ancient Chinese philosophies such as Tai Chi, Yin and Yang, Five Elements and Eight Diagrams to boxing principles, boxing skills, training principles and fighting strategies. Many foreign friends have been attracted to the Wudang Mountains to learn martial arts. In June 2010, Pinnick Jake from Illinois of the United States came to the Wudan Mountains to learn martial arts in a Taoist traditional martial arts school. After more than a decade of dedicated learning, Pinnick Jake has now become a martial arts instructor, and the 16th generation descendant of the Wudang Sanfeng Sect. In December 2020, Tai Chi was inscribed on UNESCO’s Representative List of the Intangible Cultural Heritage of Humanity.