I now understand and believe that you don’t have to be a popular artist or a celebrity just to appear as a guest on a television and radio show. After declining some television shows due to time constraints , I finally agreed, said yes for a radio  interview and  got an hour of air time. A radio interview at DZAR 1026 Manila which is also known as the Sonshine Radio. How cool is that?

Sonshine Radio’s Biyahe at Gimik is a Philippine travel program which is aired every Mondays, Wednesdays and Fridays from 2:00 to 3:00 in the afternoon. The show is hosted by Tony Cuevas, a veteran television and radio broadcaster. The radio program also helps the Department of Tourism in promoting the Philippines as a major travel destination. They also invite other travelers to share their insight about their adventures and misadventures on the road. 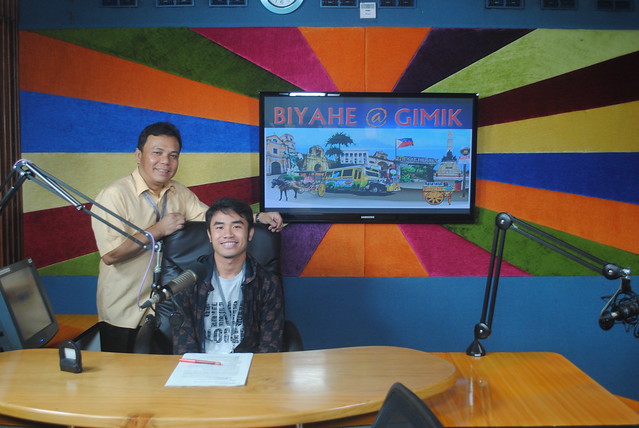 After the radio interview at DZAR 1026 Manila or Sonshine Radio’s Biyahe at Gimik program with radio host Tony Cuevas.

I felt so weird that a talkative human being like me went a little ashamed because the first time show appearance struck fear into my heart yet I managed to be spontaneous during a conversation with a microphone. It is truly amazing and I really felt so overwhelmed *wink  . Needless to say, it was an exciting radio interview. Prior to the show,  the host and its producer expressed their gratitude towards myself for showing up on their program. 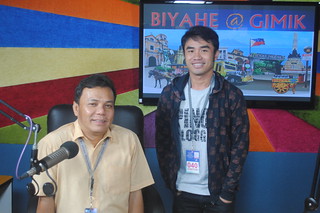 Where have you been lately? Have you been to Bicol? Tell us more about your Dipolog trip? When did you start to travel? How many provinces did you visit? What’s your dream destination? What made you a travel blogger?  These are some of the questions I can still remember being asked by the host and questions coming from the listeners of the show. I really had a great time. My very first live radio guest appearance was fun, interactive, fascinating and I considered it as a wonderful experience.

I personally want to thank and salute the staff of Sonshine Radio for inviting people like me in sharing  the beauty of the Philippine Islands. Biyahe@Gimik is a global Filipino travel show with an edge that promotes Philippine tourism, music & arts, tradition & culture, festivities and a lot more.

For more updates, Find the radio program’s  Facebook at Byahe at Gimik or visit their website at Sonshine TV Radio.

The video will come your way shortly.