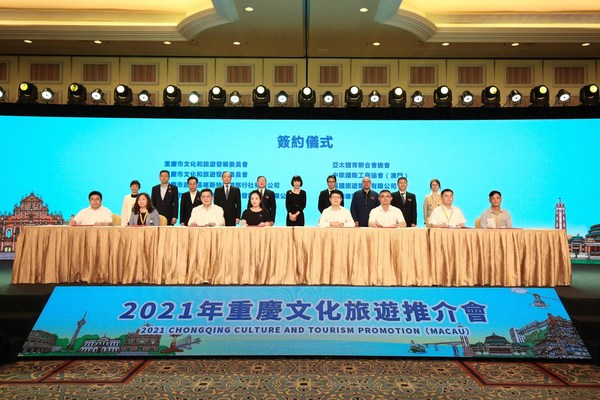 MACAO, July 12, 2021 /PRNewswire/ — From the display of intangible cultural heritage such as Chongqing paper-cutting and dough sculpture, to the culture and tourism promotion and performances of districts and counties… Chongqing’s charm has landed in the 9th Macao International Travel (Industry) Expo.

In order to promote the cultural and tourism exchanges and the tourism cooperation between Chongqing and Macao, the Chongqing Culture and Tourism Week in Macao was held at Cotai Expo, the Venetian Macao from July 8 to 12. Series activities such as a special promotion for Chongqing tourism, featured theatrical performance and flashmobs, have not only showed a Land of Natural Beauty and a City with Cultural Appeal, but also attracted a large number of Macao compatriots to visit and interact.

Chongqing Cultural Tourism Week in Macao is sponsored by Chongqing Municipal Commission of Culture and Tourism Development and the Foreign Affairs Office of Chongqing Municipal People’s Government. In order to further enhance the knowledge and understanding of tourists from Chongqing and Macao, and improve the media exposure and influence. It includes four promotion meetings, three cultural flash performances, the display of intangible cultural heritage, and lucky draws.

At the promotion conference on July 10, an official from Chongqing Municipal Commission of Culture and Tourism Development presented the overview of Chongqing culture and tourism to the guests, including the characteristic cultural tourism resources and routes. The distinctive urban scenery, natural landscape and folk customs of Chongqing as a mountain city, river city and sleepless city have attracted a lot of attention and recognition.

"With close exchanges, especially the friendly tourism exchanges, Chongqing and Macao are each other’s important tourism partners and tourist destinations." Qin Dingbo, deputy director of Chongqing Municipal Commission of Culture and Tourism Development, mentioned that since the flight resumption of Air Macau in September 2020, the number of tourists visiting each other is also recovering.

"This speaks volume for that the tourism markets of the two regions have a solid foundation and strong resilience." Qin said that tourism is a bridge to spread civilization, exchange culture and enhance friendship, as well as an important driver of economic development. Chongqing and Macao will continue the friendship, strengthen the cultural and tourism exchanges and cooperation between the two regions, and jointly create an inclusive, mutually beneficial and win-win future.