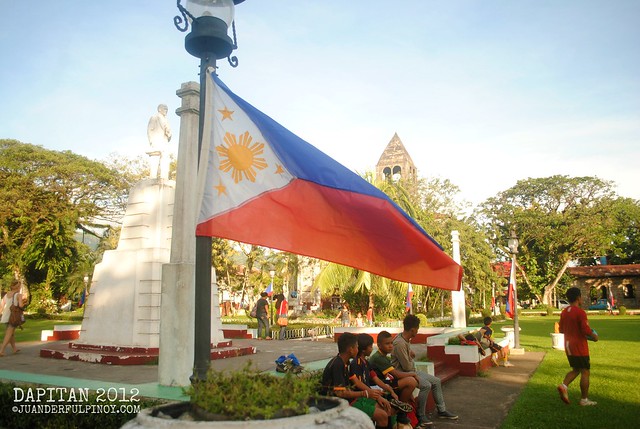 The hudyaka festival 2012 was over and we wanted to share our contemplations with you. I seriously wanted to go to Davao , Misamis, Iligan , Pagadian , Bukidnon and a lot more. See… I wanted to see more of Mindanao this time . I wanted to feel the  good times than bad times as I was running out of travel funds.  But I will keep you guys updated with our misadventures in Mindanao.

Our initial plan was to rediscover the city so We spent the whole day in Dapitan and took a lot of photographs of its historical attractions . Although I spent an intimate moments alone  in  Dapitan   last year,  my excitement was still there .  Needless to say, at that time I thought I was surrounded by a terrific group of travel bloggers/photographers.

While most Filipinos spent the day at the malls and parks. We observed the Philippine Independence Day pre celebrations with a group of teenage kids playing football at the park . We chanced upon seeing and exploring the popular landmarks like the Dapitan Church , Relief Map of Mindanao, Santa Cruz beach, Rizal Park, The Sangguniang Panglunsod , The sunset Boulevard and we also had a late lunch at Erlinda’s Food house . I wish we had a little extra time together so we could spend some good moments at the Gloria Fantasy Land. I know this is so late but I still hope that the 12th of June was celebrated with a big BANG!

I RECENTLY DISCOVERED THERE ARE POST CARD BLOGS OUT THERE. I REALIZED IT WOULD BE A GREAT IDEA TO CREATE A POSTCARDS SERIES HIGHLIGHTING MY TRAVEL ESCAPADES  WHILE ON THE ROAD. A PICTURE IS WORTH A THOUSAND WORDS SO IT DESERVES A SEPARATE BLOG ENTRY. THIS IS A GOOD EXCUSE TO POST PHOTOGRAPHS WHEN YOUR BLOGGING LIFE IS OUT FOR GOOD WORDS AND A REMARKABLE IDEA TO GIVE MY PHOTO GALLERY AN AMPLE SPACE TO BREATHE.