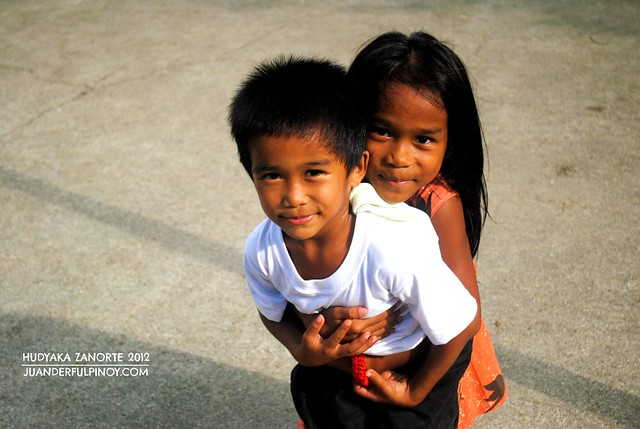 In the last couple of weeks I have finally found time to mingle with kids. Aside from me , I was joined by my travel blogger friends at the Dipolog Plaza to familiarize ourselves with the children’s playground prior to meeting the DOT staff at the provincial city tourism office in preparation for the Hudyaka Zanorte festival the next day.  I seriously never had any experience taking care of children . I guess the last time I could ever remember was a year or so ago , the time when my nephews came all the way from Germany to the Philippines because their grand mother died. Although, there were language barrier as they don’t know how to speak English.  Lucky that I got along pretty well with those kids with the help of a sign language.

I was busy taking photographs of the entire plaza when these young local kids approached me to have their pictures taken using my camera. I got quite a handful of good memories as these children showed friendliness to a stranger like me. They even followed us wherever we went including the church of Dipolog just across the plaza and so much more. When I first met these kids, I thought they were shy  and so cute. They looked as if they just woke up from an afternoon nap and went directly  to the public plaza to play.

They started running  like  there is no tomorrow. And on our way back to the hotel , I started asking myself what would happen to these kids ten years or 15 years from now. What would happen to them when they grow up? Would they be like me in the future? Would they ever feel the pressure of life? I got so interested with what sort of people would they become? Sometimes I realize , it feels good to be forever young , you don’t actually think of things too much. Then I uttered “I am grown up now”.

I was recalling the scenes of the city that day and I thought I was just a new kid in town.

I RECENTLY DISCOVERED THERE ARE POST CARD BLOGS OUT THERE. SINCE MOST OF THE TIME I’M ALWAYS ON THE ROAD , I REALIZED IT WOULD BE A GREAT IDEA TO CREATE A POSTCARDS SERIES HIGHLIGHTING MY TRAVEL ESCAPADES  WHILE ON THE ROAD. A PICTURE IS WORTH A THOUSAND WORDS SO IT DESERVES A SEPARATE BLOG ENTRY. THIS IS A GOOD EXCUSE TO POST PHOTOGRAPHS WHEN YOUR BLOGGING LIFE IS OUT FOR GOOD WORDS AND A REMARKABLE IDEA TO GIVE MY PHOTO GALLERY AN AMPLE SPACE TO BREATHE.