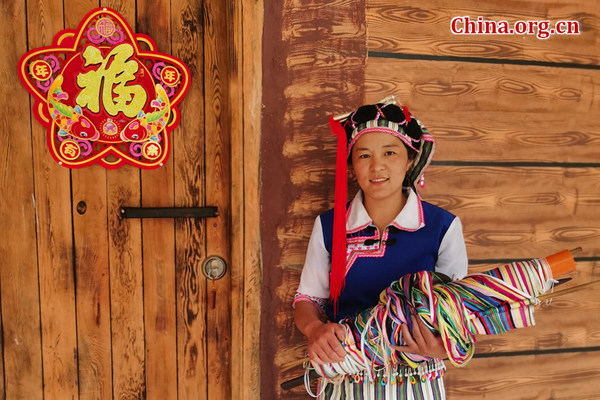 NUJIANG LISU AUTONOMOUS PREFECTURE, China, May 25, 2021 /PRNewswire/ — This is a feature story from China.org.cn about how a village in Nujiang, southwestern China’s Yunnan province, finds its way from poverty to prosperity:

Ma Jinhua in Chala village, Yunnan province, stands beside her family-run homestay inn on May 20, 2021. [Photo by He Shan/China.org.cn]

Chala, a village perched on a mountain on the eastern side of the Nujiang Valley in Gongshan county in northern Yunnan province, once largely relied on subsistence farming. Now, it is thriving on a rural tourism boom.

Thanks to its location close to the First Bend of the Nujiang River — a top tourist attraction in the area — as well as its unique Nu culture and customs, the village of more than 300 Nu people has found a new way to prosper.

Wang Guocai, head of the village, said poverty was what he remembered most about his childhood. In those days, Wang’s parents could afford to buy him just one pair of shoes for a whole year.

When he became a teenager, he spent eight hours walking from the village to his high school in the town of Gongshan county, treading on trails that became muddy every time it rained.

Much has changed since 2017 when the local government helped villagers to rebuild their homes with interest-free loans, and a new highway connecting remote areas in Nujiang was put into use at the end of 2019. For Wang, the one-day journey now takes only a 10-minute drive.

The improved road infrastructure also meant that travelling to the village has become much easier for tourists, and more tourists have led to better income. The annual per capita income for people in the village rose from 2,400 yuan (about US$387) in 2013 to more than 10,000 yuan in 2019.

Taking advantage of the culture and music of the Nu ethnic group, as well as the beautiful scenery, villagers began to increase their income by offering homestays, sightseeing services, and traditional, home-made cuisines.

Chala village is part of a demonstration project launched by the government of Gongshan county and a state-owned company in 2019, aiming to improve tourism facilities and services in the county’s five villages.

Ma Jinhua, owner of Mountainous Farmer Inn, was a beneficiary. With a low-interest loan of 300,000 yuan, she refurnished her family’s house into a guesthouse with clean toilets, fancy furnishing, and a beautiful courtyard in late 2020. Her inn opened in February after COVID-19 had been kept at bay across the country, and quickly started to earn an average of 5,000 yuan a day, way more than what her family had made before.

The five rooms at her homestay, all with a pleasant view of the mountain, cost 320 yuan to 360 yuan per night each. During peak seasons like Spring Festival and the National Day holiday, the inn is often booked up by visitors driving directly here from all over the country.

She hired four local villagers to help out at the inn, paying them each up to 180 yuan a day.

During the recent five-day May Day holiday, her guesthouse received many tourists from the cities seeking a relaxing and rural retreat. The inn generated a revenue of nearly 10,000 yuan a day during that span, almost doubling the usual daily income.

"I wish I could pay off loans as soon as possible," the 35-year-old Ma said.

The village’s buoyant tourism is a typical example of China’s efforts to vitalize rural areas, which has been backed by concrete government plans. According to China’s 14th Five-Year Plan (2021-2025), the government called for further boosting of leisure agriculture, rural tourism, and the homestay economy.

The rural travel trend has also been fueled by the mentality among Chinese city dwellers who want to escape city noises and look for a simple lifestyle in the countryside.

A tourist surnamed Fu, who came from Hainan province to stay in Ma’s guesthouse, said he visited the village 20 years ago when it was poor and bleak despite its pleasant scenery.

"I feel relaxed and happy when I have home-made dishes and enjoy the view outside my room," he said. "The homestays are well-equipped and even better than those in big cities."

There are seven homestay inns in the village now, and four more are under construction.

Wang, the village chief, said that the village offers visitors more than idyllic scenery. They can also try their hands at picking vegetables and fruits, attend local shows, and learn traditional crafts and customs.

According to a report by Trip.com, China’s largest online travel agency, Gongshan county became one of the fastest-growing destinations in China’s rural areas during the May Day holiday.

With more opportunities coming along with tourism in the village, more young people have chosen to come back, Wang said.

Ma, whose two sons study in school, said she has never expected her sons to come back to help with business after graduation, but their return will be welcome.