I was recuperating from the severe sleep deprivation and on the next day I thought I was fully recovered. For a couple of days I did not get enough sleep .  I really don’t know what is it about Restreto Inn and Cafe but I really had a good night sleep even if the reason why I stay there was to wake up early . Mind you , I was able to sleep a full nine blissful hours inside my room. My first night at the inn, I swear to God , I had the first good night’s sleep which I did not have in the last couple of months. I remember, I was lying on the bed watching tv and in just one snap, I fell asleep.

I woke up late and soon found out everybody had their breakfast already. I  even forgot to take my breakfast. Almost everyone in the group seemed to be working on with their jobs online as they were ignoring me as if they did not see me.  Anyway , My tummy was starting to growl at that point and I was craving for some whole grain oatmeal for breakfast but decided to order a tasty sandwich instead. We did not know exactly what our itinerary for that day until my phone rang . The group was expected to be at the provincial capitol to make a courtesy call at the Tourism office. 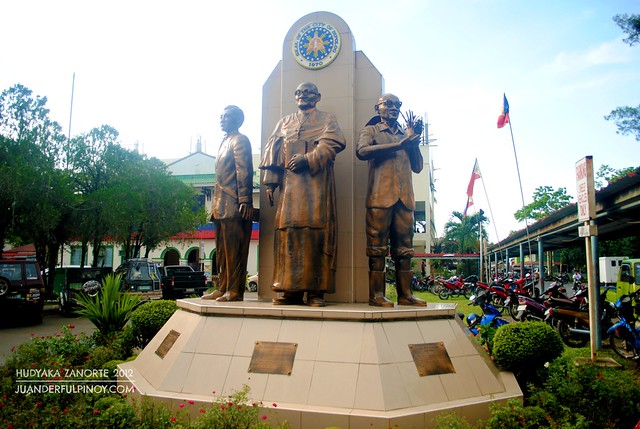 Benzon, a crew from sevenonehundred welcomed us at the provincial capitol plaza. I thought , we were on a school field trip filled with educational adventures. There were actually 7  or more staff from the tourism office  who greeted us at the provincial capitol . They handed out  flyers, flyers that  are simply a full-page information  about the city including landmarks and attractions of the province and other stuff about what we can do during our stay   however the contact person was not around so we decided to move to another destination. 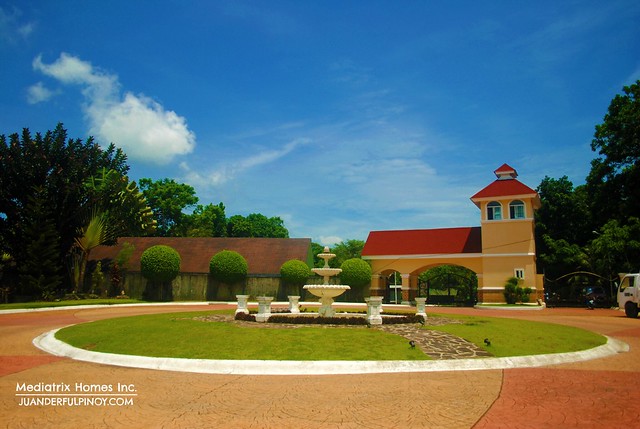 We hopped on a tricycle cab and the next thing we know, we were approaching a different path close to a residential  subdivision which I find it so overwhelming. We waited for a couple of minutes when Mr. Ralph Lorenzo Tan, Marketing Manager/owner of Mediatrixhomes showed up and invited us for lunch. Much to our surprise , a sumptuous meal was prepared for all of us. They surprised everyone with Lechon, a pork dish which is cooked on a large stick and cooking it in a pit filled with charcoal. There were other meals served too like a hot soup, grilled fish , fruits and so much more. The lunch party took place in a comfortable dining room . During lunch time we talked about  a number of interesting topics like how cheap it is to buy a lechon in Dipolog City. Would you believe that Lechon can be sold so cheap at Php3500?

Image above courtesy of Sevenonehundred

Part of our discussions were the humble beginnings of Mediatrix Homes and their future projects in the community. Mediatrix Homes just so you know started operating in year 2000 to help people from different walks of life build their home sweet home based on their lifestyle and capacity to pay. Through the years, Mediatrix homes completed at least ten more subdivisions varying from high-end to medium cost housing projects. Mediatrix Homes projects is not only kicking in Dipolog but in Ozamis and Oroquieta. So you might want to have a better shot at nailing down your dream or vacation house. Make your investment count. 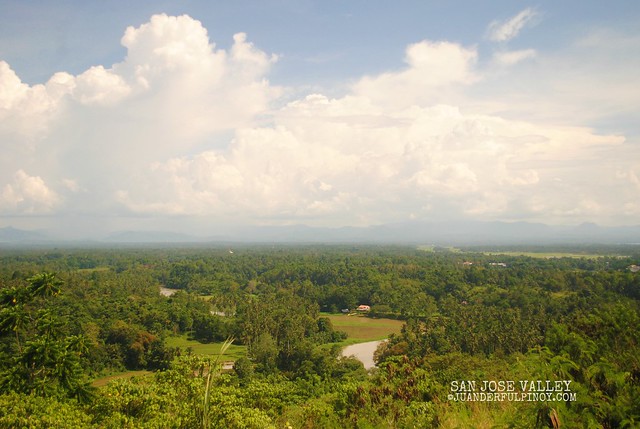 After lunch , Mr. Tan and his brother drove and joined us to San Jose Valley situated on a multi layered scenic and mountainside of Lower Dicayas in Dipolog City. I just thought that driving us up to San Jose Valley would somehow give me time to take a nap for a few moments . But I must say that the beauty of nature is at its best in San Jose Valley. It was truly a breath of fresh air. Be fascinated by the Dipolog River silently flowing right below the subdivision. 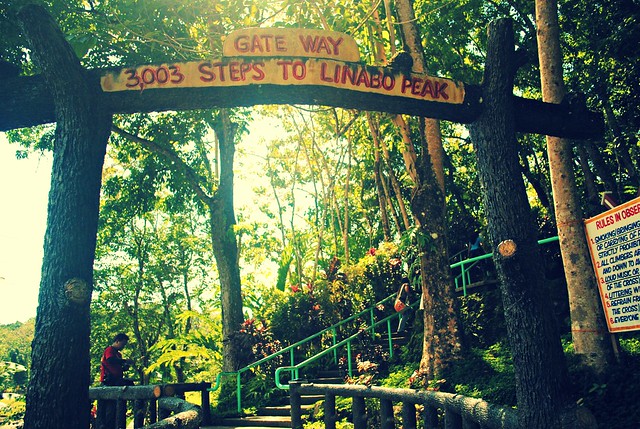 We also caught a glimpse of Linabo Peak. At last, I saw the promise of what the much appreciated landmark holds. According to Ralph, climbing the 3003 steps is worth the climb so we have to start the trek early in the morning. Linabo 3003 steps is the haven among locals and visitors during the holy week . Hundreds of devotees climb the 3003 steps to observe how Christ suffered . 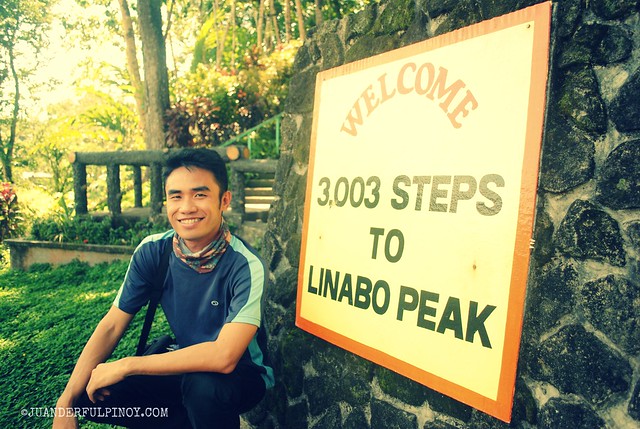 This one’s for you. *laughing
I decided to find the best location, good background  so I could pose in front of the camera. Thank you Thirdy for the nice photo. Impeccable! 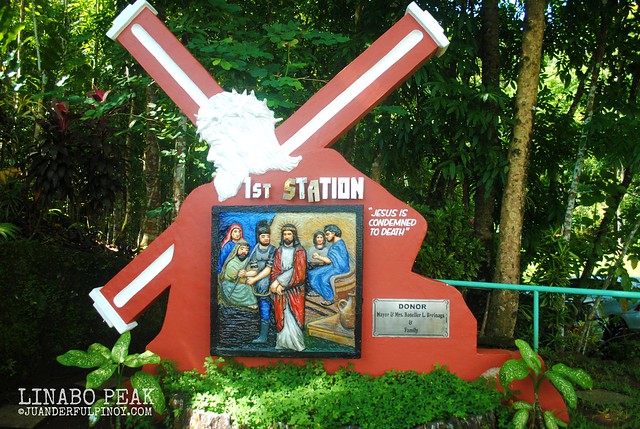 There are fourteen stations of the cross which we have not climbed unfortunately. One interesting information I learned from Ralph was that  the staircase is being used by kids living uphill to slide down the narrow metal railings ignoring the injury they might suffer after playing around. This could be fun to them. Whoa! he gave me an impression how extreme dipolognon kids are. #wink 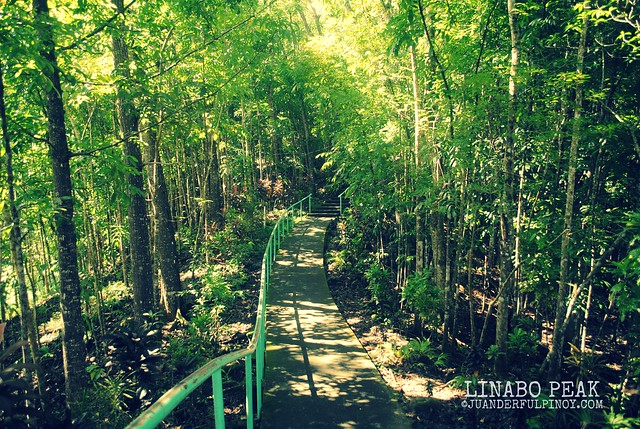 You will be more than thankful now as concrete staircase is  available for visitors which was constructed  in early 90’s. So when you get to Dipolog , start your day at the Linabo peak . Begin the trekking early in the morning and rest during noon. Due to time constraints, we only reached the first station of the cross but overall I guess it is one of the beautiful places in Dipolog to seriously reflect. I am sure you know what I am talking about , a place I can tell you to sometimes just forget life and savor the tangible  beauty of nature . 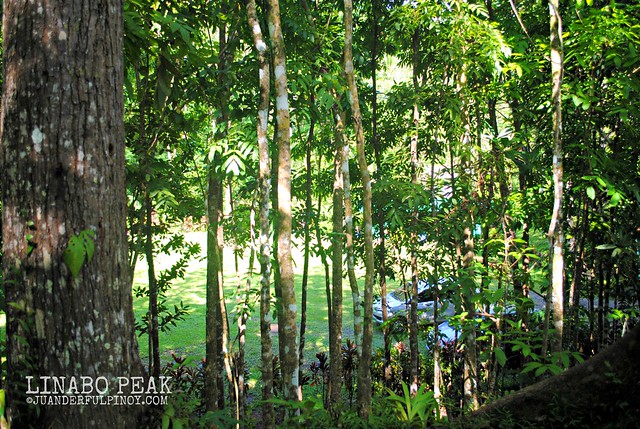 Getting to Linabo is very easy. From the city center you can hire a local tricycle cab or habal habal and ask them to take you to the drop off area. It takes approximately 15 to 20 minutes to reach the drop off point. Fare costs about Php50.

Too many cool places to explore in Dipolog yet so little time. A welcome party was waiting for us so we had to go back to our inn and  freshen up.

I hope you guys are having a  great time reading some of the highlights of this trip. We have a lot more on the way so stay tuned!

This tour has been brought to us by: