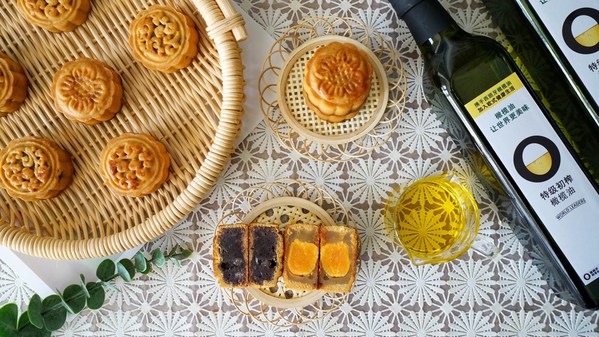 BEIJING, Sept. 11, 2020 /PRNewswire/ — Once summer is over, the Mid-Autumn Festival, a traditional Chinese festival, is drawing closer. For thousands of years, it has been a traditional custom all over China to enjoy the full moon and moon cakes with family members.

There are many distinctive traditional recipes across China and most of them are made with a lot of sugar and polyunsaturated oil. The intake of high sugar and seeds oil will lead to a number of health risks. How can we enjoy the delicious moon cakes and maintain a healthy diet at the same time?

Combine the syrup, edible alkaline water and extra virgin olive oil from Spain in a large bowl and stir well. To blend with the flour later, remember to mix the liquid well. Sift the flour into the mixture.

Gently fold and press, while turning the bowl counterclockwise until the flour and liquid have mixed well, then slowly knead it. Cover it with plastic wrap, and set it aside for 1-2 hours.

Slowly round and line up the filling. Cover with plastic wrap to retain moisture.

After the crust relaxed, weigh and divide it into 15g each portion.

Brush the inside of moon cake mold with olive oil to prevent sticking. Insert the dough into the mold and press to form.

The moon cake will taste softer after 1-2 days. When the crust becomes oily and shiny, it is the best time to eat.

Ayao mentioned that as a gourmet expert and blogger, she had learnt a lot about global cuisine over the years, but when talking about the healthy diet, the first thing that comes to her mind is the Mediterranean diet. As we all know, olive oil is widely known as a very healthy cooking oil, rich in monounsaturated fatty acids, also known as "healthy fatty acids", which can effectively reduce the risks of cardiovascular disease and diabetes.