The last commercial flight of PAL‘s Boeing 747-400 arrived early morning September 1st, 2014, from San Francisco (PR105) greeted by a water-canon salute at NAIA Terminal 2 as a tribute to 35 fruitful years of flying passengers across vast distances. PAL crew and loyal PAL passengers became nostalgic in bidding goodbye the jumbo jet that revolutionized air travel starting in the 1980s. PAL’s B747s have been replaced by the ultra-modern B777-300ER. 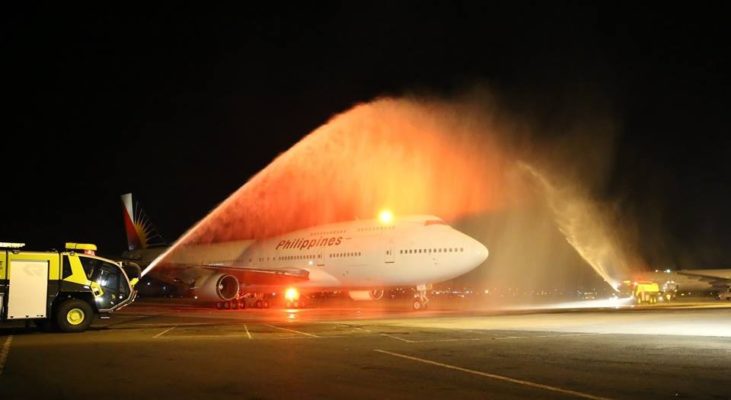 According to news report, the “flagship aircraft” title was transferred from the B747-400 to the B777-300ER in an emotional ceremony on May 12 at Villamor Air Base in Pasay City. The original jumbo jet—the B747 series 200—arrived in Manila in December 1979. It required several airport-terminal facilities modifications due to its size.

It will now be replacing the 747s with the newer and more fuel-efficient Boeing 777.

PAL presently has six Boeing 777 aircraft in its fleet, which currently has daily flights to Los Angeles, San Francisco, and select flights to Vancouver and Toronto.