“Sunny day…
sweepin’ the clouds away,
on my way to where the air is sweet…

Can you tell me how to get,
how to get to Sesame Street?”

It was the very first foreign song I learned to sing when I was growing up. And I thought it’s fun and effective way to learn. As a young boy, I followed a program that has given me the opportunity to enjoy, learn a new language thus will forever be remembered for life. Watching this video makes me feel nostalgic.

I grew up with this famous  question that  still needs to be answered. Can you tell me how to get to Sesame Street? That I personally believe is  just a global influence to be understood. Like most of you, Sesame Street is my favorite show when I was growing up. It’s been on the air since 1969 which brought real meaning to what LEARNING should really be  for all the kids in the world.   I have not seen it for a long time now but trust me, the memories will surely last a lifetime. Sesame Street’s unique way of entertainment  is extremely inspiring. I am very positive that those young at hearts are still fascinated by the characters of Sesame Street. The show taught me the value of literacy, logic and skills through a rare but beautiful set of circumstances which thoroughly shaped and molded my childhood and pretty much my entire identity into the person I am today. Sesame Street aired all over the world. So surely the message of the show’s diversity when it comes to learning are integrated, concise, comprehensive and cross cultural. Who would forget Big bird, Bert, Ernie, Oscar the grouch, Cookie Monster, Grover and Elmo. Damn I miss my childhood days. Then I started humming this song over and over again. I was singing these foreign lyrics on my mind when I was three years old without having any idea what it means exactly. It was not clear at the very beginning  but when I found out the entire meaning of the words everything fell into the right place.  Now I often think of how I got so hooked on reading and exploring foreign languages and just recently landed a job in a career that requires foreign language skills.

Back in college, I used to have a German and French Language classes. I took these languages for two consecutive years and I never used it that much so I’m not that fluent but I can manage to speak a little.  I am planning to take foreign languages again next semester just so you know. And I intend to turn my wasted school years into something productive and useful. This sounds very tough because I know I will start from scratch and I am well prepared to face the greatest challenge.

❝One language sets you in a corridor for life. Two languages open every door along the way.❞
‒Frank SmithSo tell me, What do you think is the top benefit of learning another language. Is it for travel, love, money or Intelligence?

Learning a foreign language gives us insight into the world’s culture. One will be able to communicate with people who speak another language. When we also travel, we get the sense of how everyday life is lived because we get to see the clear picture and understanding what other people are saying. One of the benefits of learning a foreign language is a different perspective you will get from seeing the world through our eyes. Every nation has its own unique language and the benefit will be gaining the opportunity to identify and compare your native tongue from a slightly different point of view. A person who can speak another language can easily bridge the gap between cultures thus it contributes international diplomacy and promotes peace.

In today’s fast changing world, learning another language is very important. Regardless of what career you choose, those who have the ability to speak in English or another language have the edge. Possibilities and opportunities are up for grabs when you have additional language skills. Think of the opportunity to see the world of travel.

In the Philippines, English is part of the school academic curriculum. Admittedly, English is the language of Power. It’s prestigious and the most influential language of the world. For Asian People, the ability to choose another Asian language may seem a good option. On the other hand, the Japanese language may seem to be a perfect choice as it’s known to be economically powerful all over Asia. One may also consider learning Mandarin Language as China is considered as the super power of the future. Meanwhile, Spanish creates opportunities because the Spanish language is one of the most widely spoken languages all over the world. French or Italian may be a romantic choice. Why not?

I agree there are so many different languages to learn in the world. It might take a lot of effort to know all of these languages but look at things in a positive and a wider perspective. Imagine the chances that would come your way if you take the time to learn some of these languages.

I personally believe, intelligence is the top benefit of learning another language. It unlocks the full potential of our brain. Did you know that our brain is composed of pure fat which used to insulate its billions of nerve cells? Yes, we have a fat head! The faster it can send messages the faster we could think and analyse. Our brain requires specialised fats just the same fats built the brains of our prehistoric ancestors and helped them to learn and evolve at a fast rate. The whole learning stuff could be a slow moving process but it will seriously boost your brain power. We may have a different insight of what’s the most important benefit of learning foreign languages but the bottom line is obviously learning new languages for all ages is truly a rewarding experience. English is not my first language but  I am trying the best of my ability to improve my English writing skills. I hope I inspire you in my own little way. 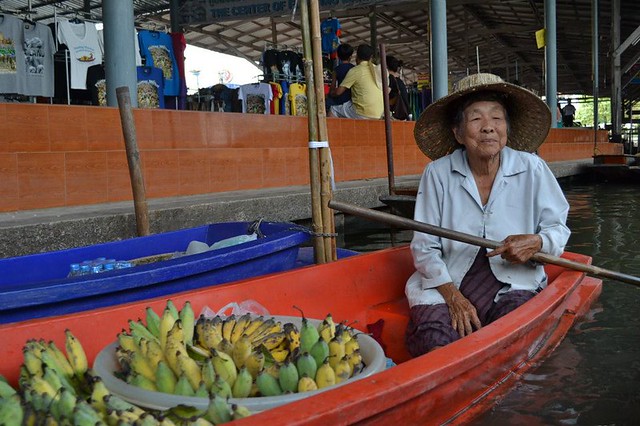 Meeting strangers at Damnoen Saduak Floating Market, Thailand. Learning a new language is fun. Had I stayed holed up in my Bangkok hotel, I wouldn’t have learned as much. It’s important to get out and meet people, use the language as much as possible.

Knowledge is power! So whether it’s for travelling, love, career and money, learning another language boils down to the most important benefits- INTELLIGENCE.  Armed with another language on our belt makes our lives better. The creative side of it is considered a treasure that can never be stolen by anyone.

I seriously want to engage myself into speaking another foreign language fluently first, then hopefully reduce my thick accent and be as good as possible and will adapt the language as long as I can. I will consider this part of the challenge done if the people who don’t know me personally, thought that I was a native speaker before noticing a mistake. Do you think I can do that? I will keep my fingers crossed.

Sunny Day. Sweepin’ the clouds away. On my way to where the air is sweet. Can you tell me how to get, How to get to Sesame Street?