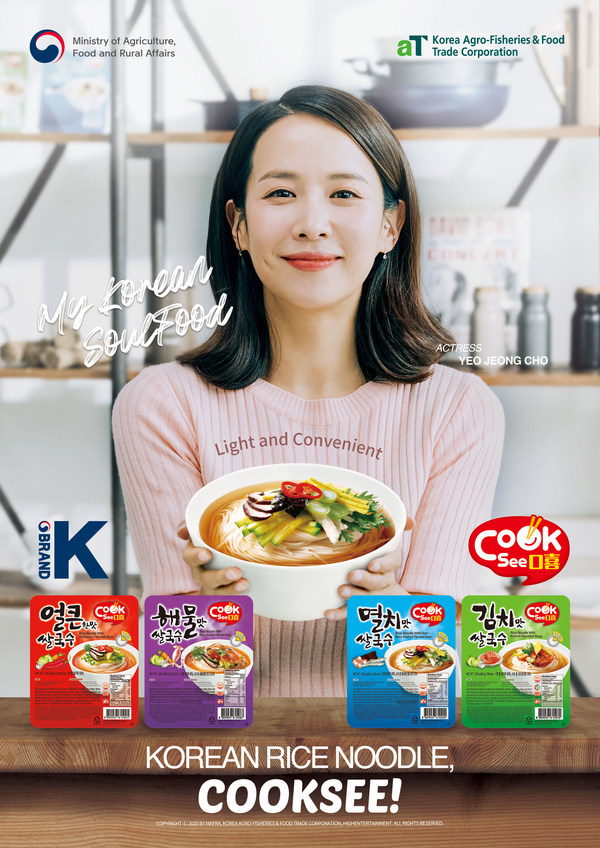 Notably, ‘Han’s Korea’, a participant in the said governmental marketing campaign created by the Korea Agro-Fisheries Trade Corporation (aT), is a corporation that produces and exports healthy rice noodles worked together with Yeo Jeong Cho, the actress of the acclaimed Academy and Cannes Awarded film ‘Parasite’. The two came together to promote ‘Cooksee Noodles’, an instant rice noodle product with various videos and photos to trademark ‘Cooksee Noodles’ as a Korean Soulfood in the United States. Through the collaboration, Han’s Korea hopes to reach out to the youth of the United States.

Cooksee Noodles not only use rice as the main ingredient, but also are not fried in oil, so it’s easily digestible and something that everyone can enjoy. Also, despite being an instant noodle, it is preservative and cholesterol-free, and can be consumed as a meal or snack. The noodles come in four flavors: non-spicy seafood, kimchi, spicy seafood, and hot & spicy, and all share a chewy tastiness.

The healthy noodles containing deep, Korean flavors can be found in amazon, h-mart, hanyang mart, and various on/offline locations in the United States.