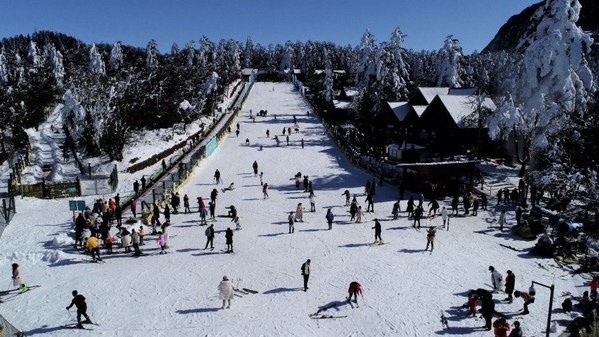 CHENGDU, China, Dec. 18, 2020 /PRNewswire/ — The three-month 22nd Mount Emei Ice and Snow Hot Spring Festival officially commenced on December 12, 2020 under the sponsorship of Sichuan Province Mount Emei Scenic Area Administration Committee and the organization of Emei Shan Tourism Co., Ltd. Compared with last year, Mount Emei is even colder this year, snow came earlier and in bigger volume, and phenomena like rime ice are particularly popular among visitors, and photos of the gorgeous and snow-capped landscape have gone viral on the Internet. 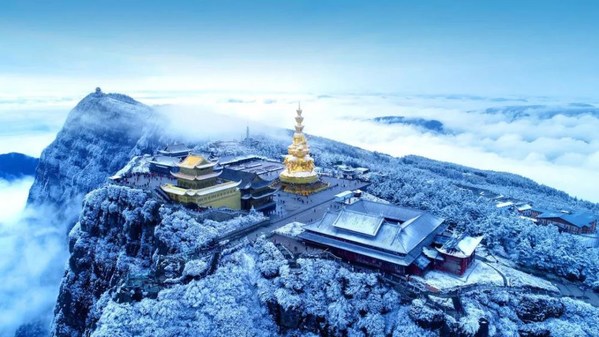 The Golden Summit of Mount Emei

Mount Emei consolidated the entire mountain’s tourism resources for this year’s Mount Emei Ice and Snow Hot Spring Festival. On the mountain, visitors could participate in about a dozen winter sports such as snowboarding, skiing and snow tubing on the 300m-long Leidongping Slope, the longest alpine and forested ski slope in China. Going down the mountain, tourists could satisfy their appetites for fine foods with unique fares of the region or relax at one of the city’s three major hot springs. Moving the whole mountain and mobilizing the whole industry have bolstered winter tourism at Mount Emei to a new height.

For the 22nd Mount Emei Ice and Snow Hot Spring Festival in 2020, the old event singularly focused on winter sports has grown into a grandiose winter carnival that will span three whole months. The scenic area has designated Entertainment Zone, Tourism and Arts Zone and Supplemental Function Zone, and even designed the “Little Monkey in Ice and Snow” Photography Competition aimed at family travelers.

Over the course of 21 years, the Mount Emei Ice and Snow Hot Spring Festival has evolved from a singular event to an innovative one with diverse offerings, from little-known festivities to a household name, the festival continues to bring surprises to domestic and foreign visitors alike. Statistics show that in 1997, prior to the first edition of the event, Mount Emei received less than 50,000 visits between December and March the following year, accounting for merely 1/12 of the year’s total. The four-month period in 2019 witnessed 850,000 visits, equating to almost a quarter of the year’s total, a surge of approximately 16 folds compared with two decades ago.

In recent years, Mount Emei has been dedicated to positioning itself as one of “Major Tourist Destinations of the World,” “Chinese and International Buddhist Cultural Tourism Destination” and a premier choice for travelers visiting Sichuan. Relying on its idyllic scenery, profound cultural heritage and unique scenic zone services, since 2019 Mount Emei has garnered numerous national-level tourism accolades such as 2019 China Culture and Tourism Integration Model Scenic Area, 2019 Outstanding Scenic Area of China and Regional Tourism High-quality and Popular Scenic Areas.

From traditional experience to innovative interaction, winter tourism at Mount Emei is gradually exhibiting its own unique model. For instance, at the “Digital Emei” Smart Cultural Tourism Experience Center, the millennia of culture and picturesque landscape of Mount Emei are presented to visitors in all their glories via digital means such as AR, VR, hologram and naked-eye 3D display. In 2019, the large-scale and immersive performance Unique Mount EMEI kicked off, and its time- and space-transcending program manifests every aspect of the exquisite beauty of its eponymous mountain and the cultural charm of China in a multitude of artistic demonstrations and stage craft settings.

In recent days, the “Great Emei” Cultural Tourism Development Alliance was officially founded, which consolidates the major scenic areas in the six cities and 39 counties of Sichuan Province and amasses the resources of the involved parties. Going forward, the Mount Emei Scenic Area will convert its Buddhism cultural advantage into industrial advantage and brand advantage, commit efforts to fostering the “pan-Emei” international tourism and culture brand, and continue to capitalize on Mount Emei’s winter tourism selling points to make it a destination truly compelling to visitors and the “third pole” for winter tourism in China.