My favorite museum in the Philippines, Museo Pambata recently celebrated Earth Day in the museum, various events ranging from interactive discussions, games to crafts. The event’s objective is to share knowledge and practices on environmental conservation to the youth in a fun manner. The event is entitled “Earth Defenders”. 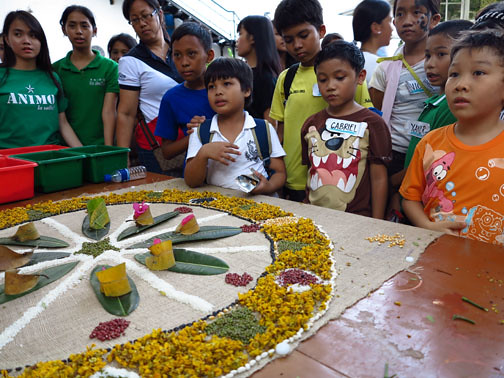 Held last April 20, 2013, “Earth Defenders” is the Museo Pambata’s annual Earth Day celebration which aims to impart knowledge and practices on environmental conservation to the youth in a fun manner.

Around 70 children from various cities in Metro Manila joined the activities. They were split into five groups, who they worked with for the rest of the day.

Ms. Sarah Queblatin facilitated the event sharing Mandala Earth Story, with the assistance from the museum’s volunteers. She began by leading the children into a guided meditation and body awareness. In this process of knowing one’s self, it becomes much easier to be aware of the problems of the planet.

Queblatin likened our bodies to the elements of our planet, and the children learned more about this concept by making body maps in their respective groups. Their body maps were discussed and displayed at the museum’s Changing Exhibits gallery.

She also discussed the problems that can be seen in the Smokey Mountain in Mountain Province, where she volunteers as a storyteller. Through a slide show, she presented how the residents of Smokey Mountain overcame their problems by being resourceful and innovative.

To sum it up, each of the groups decided on a symbol as their representation, which they incorporated into a mandala: a spiritual symbol that represents the balance of the universe. The children also made seed balls, which they either took home or gave to the museum for planting.