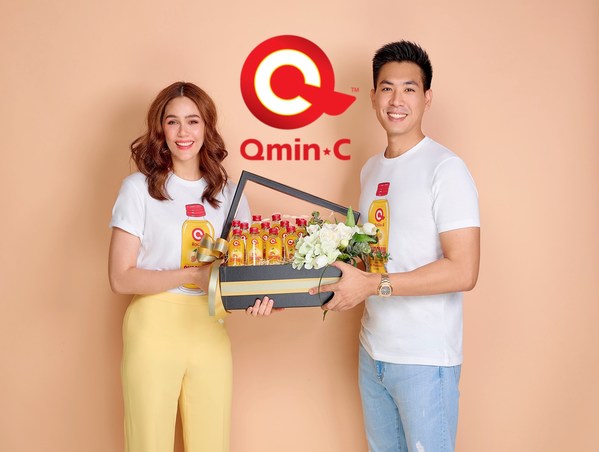 Ties up with Thai mega-star Ms. Araya ‘Chompoo’ A. Hargate to introduce health benefits of curcumin to Thai consumers

BANGKOK, Jan. 7, 2021 /PRNewswire/ — Four months after its launch in Thailand, an innovative health drink fortified with curcumin extracted from the turmeric plant’s rootstalks, has found its way on to the shelves of more than 15,000 modern trade retail outlets and almost 500,000 mom and pop stores, nationwide, offering liver function and other benefits attributed to curcumin.

Branded as ‘QminC’, the preservative-free health drink has a pleasant flavour and is sold in 150 ml glass bottles with a retail price of Baht 25 (approximately US$ 0.83) per bottle.

Mr. Thanthit Yuenyongtechahiran, President of Tera Food and Beverage Company Limited, the producer and marketer of QminC health drink, said, “We’ve introduced to Thailand an innovative health drink that is both tasty and has important functional attributes, and with the key ingredients imported from Japan. It has proven exceptionally popular at this time when people are particularly concerned about their health and immunity as a result of the COVID-19 pandemic.”

He said that, during 2021, the company expects to sell “close to a million bottles a month” of the health drink, which also contains nano-liposomal natural curcumin extracts (using proprietary technology from Japan), L-Glutathione, 20% lemon juice, as well as vitamins B6, B12 and C.

Ms. Araya ‘Chompoo’ A. Hargate, one of Thailand’s highest-ranked ‘A-list’ celebrity actresses, has been enrolled as a product ambassador to present the yellow-coloured drink. The mother of two children commands some of the country’s highest endorsement fees and is known for her healthy lifestyle. She has dominated the A-list celebrity rankings in Thailand for almost twenty years and boasts an Instagram account with more than 10 million followers.

Billboard, television, and digital advertising for the drink has blanketed Bangkok as well as towns and cities across Thailand’s 77 provinces.

QminC is being retailed at more than 2,100 branches of Tesco Lotus hypermarkets and supermarkets, and at over 10,000 branches of 7-Eleven (Thailand’s leading convenience store chain), as well as at other outlets.  The modern trade accounts for around 60% of Thailand’s grocery sales, or around US$ 50 billion.