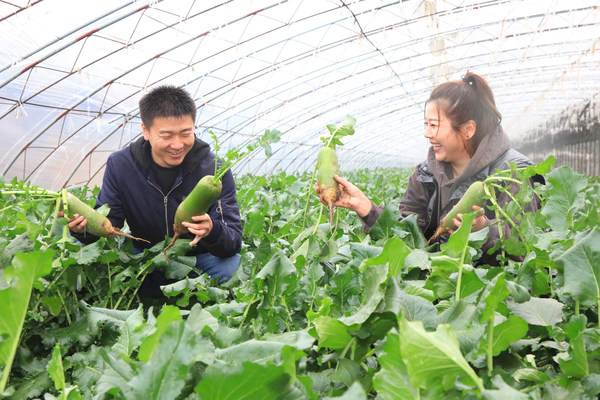 On November 18, visitors are picking Shawo fruit radish in the growing base in Xinkou Town

Designed to promote the landmark produce and healthy lifestyles, the festival aims to tap the specialty radish’s dietary and medical functions and promote the healthy food amid the COVID-19 epidemic.

After the opening ceremony, there will be a two-month-long package of activities such as radish harvesting and produce holiday markets. The festival will last into the Spring Festival, during which period visitors can enjoy these activities in over 500 greenhouses in Xinkou Town, according to the Publicity Department of Xiqing District.

Shawo fruit radish is a well-known produce brand in Tianjin and a national geographical indication product. It has been cultivated for more than 300 years. Since the 1930s, Shawo fruit radish has been exported to Hong Kong, Japan and Southeast Asian countries, and is well-known at home and abroad. The radish has also been awarded the intangible cultural heritage of Tianjin, a Tianjin time-honored brand and a national well-known trademark, among others.