Skip to content
50
SHARES
FacebookTwitter
Armored with fellow travel bloggers . Coming from work, was little sleepy. Need to be at KFC Buendia ( terminal going to batangas port) on time otherwise i will be penalized (late comers will be penalized) yup thats for real. 500 pesos for the late comers. I was thankful there’s Mrt and Lrt express . 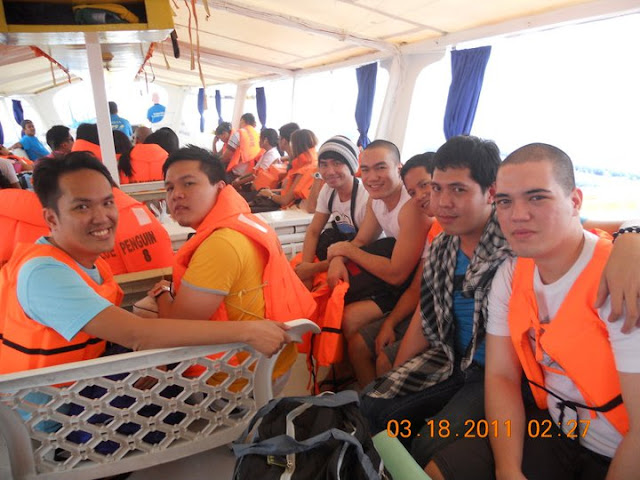 Coming from Boni Avenue station with friends Julz and Pat , We decided to take Mrt Lrt route . We always anticipated there’s a heavy traffic .So we came just on time. Never did we realize that Harry and Xerod be coming so late… 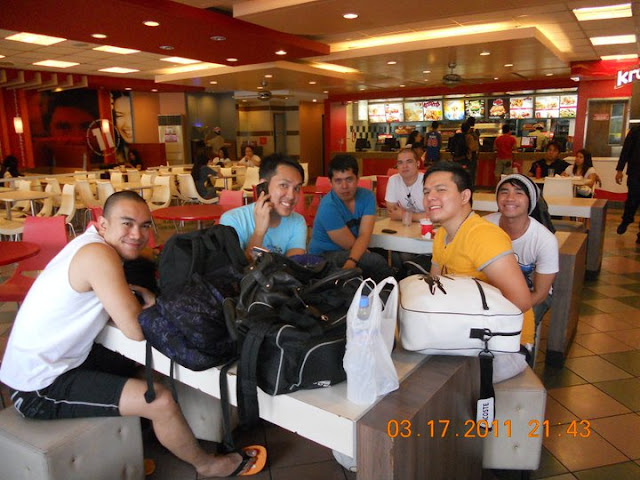 Around 10:30 We’re finally onboard with airconditioned bus going to Batangas Port. Its about 2 long hour bus ride , but its quite a fantastic ride. The group was a little loud and Im glad people on board was not mad with us. I guess that’s pretty normal specially for those who are travelling in groups.
At last we finally reached Batangas Port,  I was really excited along with my fellow travel bloggers. Then we were surprised that Harry together with his friends arrived just a couple of minutes after we got to the port. Yii… We huddled for few minutes and we’re good to go. It was also a great experience when we met someone from ” Father and Son” we got 2 free passenger tickets . the fare is around 420 if im not mistaken and you also have to pay for the environmental fees or taxes whatever you call it.

Due to Tsunami scare , I was contemplating not to join the summer activity but I realized this happens once a year . This event/reunion happens for 3 consecutive years now. So I didnot nurse that feeling . I didnt think about any other stuff knowing I would only end up more scared ..
I knew it was going to be a long bumpy boat ride . But at anyrate, the boat ride was cool enough for people to enjoy the views everywhere. It was about 2 hours to get there and  I was expecting for a less crowd at that time however I was completely very wrong.  The last time I visited Puerto Galera was last year . It’s the same event, the only difference was that there were a couple of faces missing yet a newly found friends gathered in this so called paradise in Mindoro. 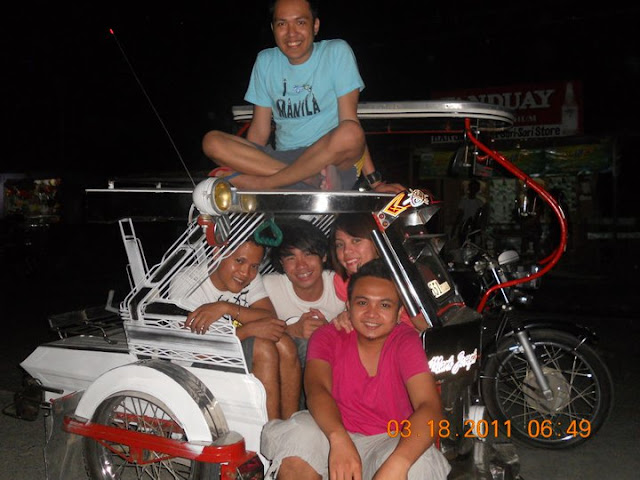 If you backread my posts I mentioned Puerto Galera is named as 2005’s Most Beautiful Bay. It is world-famous for splendid beaches, coral reefs, and exquisite dive sites and it’s still one of the best of the best beaches in the Philippines. It’s really extra ordinary.
It was almost lunch time so we had to take brunch because we’re really starving to death. And later on we’ll find a place or a house to rest for a moment and drink for the whole night.Mind you we got a room for only 1200 pesos . Airconditioned rooms , 2 beds with cable tv, clean toilet and you can also ask for comforters, additional pillows ,whatever you need. Its a great room for 14 people. We came in a large group so we decided to get 2 rooms but its still worth the money . Its originally 800 pesos but since its peak season we accepted the last offer  of P1200.00. I know its gonna jump astronomically up to 2500 to 5000 this summer. That is for sure…Let me know if you have plans to get there so I could give the number of the owner of the house and get the reasonable rates. 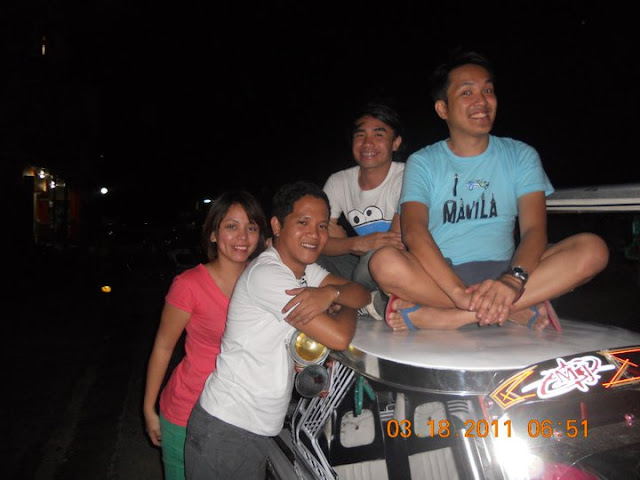 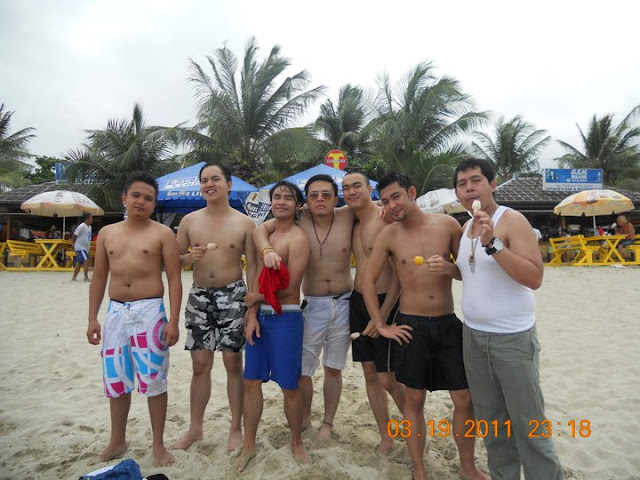 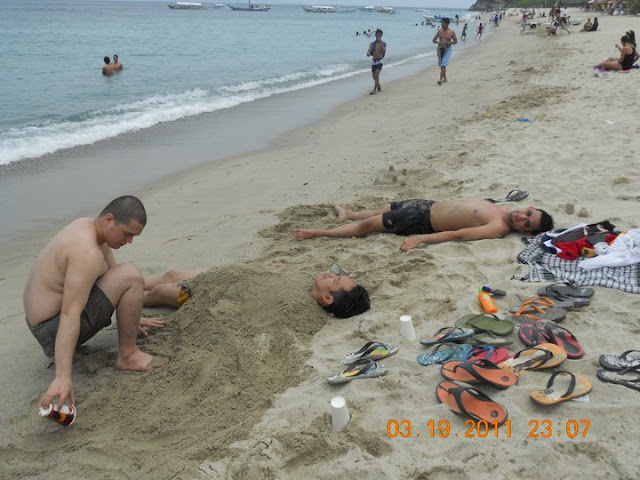 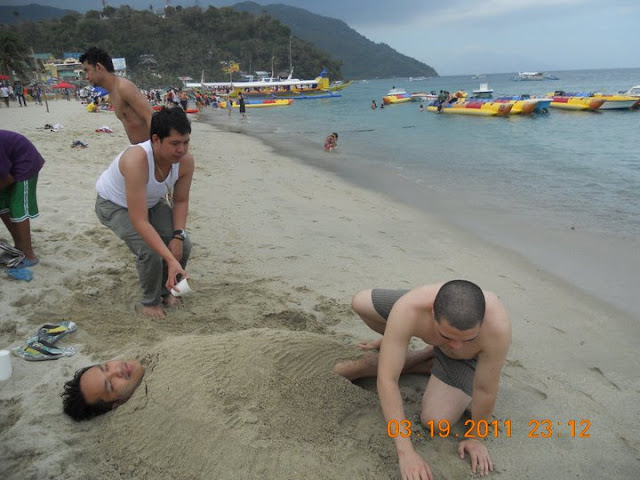 I guess , when you get to the place , You really have to try their bestseller which is the Mindoro Sling. It tasted like a commercial GIN with pomelo . The effect was cool, its not as hard  as you think, but definitely its a must when you get here…
Day 2 was even great, the group tried to explore the beauty of the province so we decided to take a quick tour with the famous Tamaraw Falls. Its a 45 minute jeepney ride. . I am going to show you the videos how to get there. I want to personally thank Julz for his time being the host of this video tour. 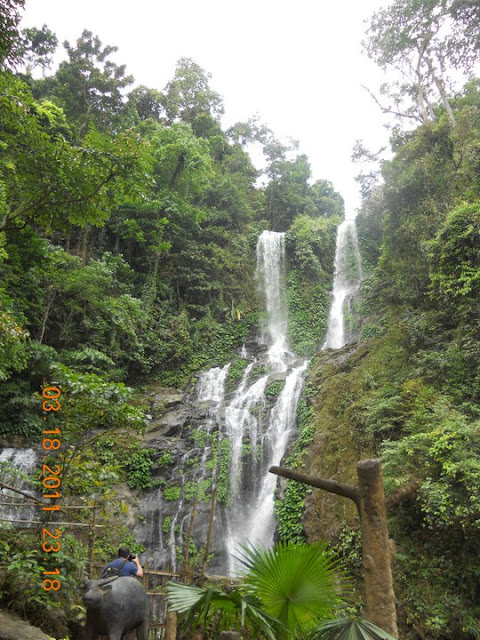 Aside from the beaches , the place has a lot to offer  most specially for those nature lovers. As we go along I am going to feature the famous Tamaraw Falls among locals. Its actually named after a species called Tamaraws which can only be found here in Mindoro . Apparently these species are no longer visible . It’s a 14 kilometer ride so expect that its really quite a long journey to the falls .. But when you get there, you will be relaxed as you see the hidden treasure Mindoro has to offer.  Dont miss out this place. To add spice to your trip, add this to your itinerary…