There’s just nothing cooler than promoting your country through your blog site ..  Getting to see something that most people don’t?  Well, that’s the stuff that bragging rights are made for! Come on.  Admit it.  =) I feel a little special ..That’s just how I hope to make you feel with this post.  Special  …My quest begins here … You’re going to get an insider’s look at INTRAMUROS.

Intramuros or the walled city of Manila, is located in the southern side of the Pasig River close to the rivers entrance into Manila Bay. 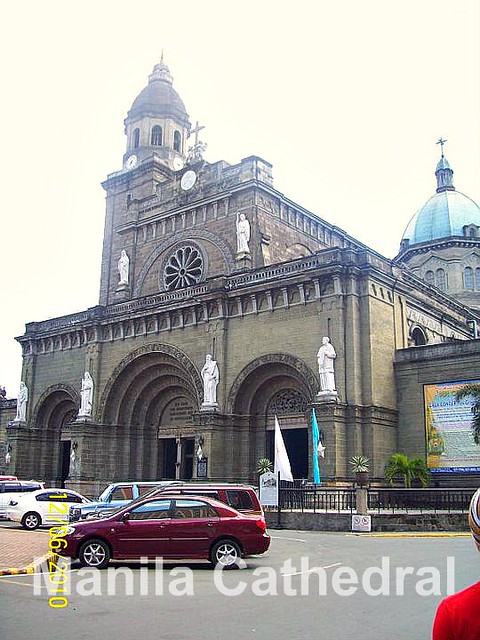 Manila is the capital of the Philippines – heart and soul of the country. And at the heart of Manila is Intramuros. It basically features history of Manila  many years ago.  One of the fascinating places in Intramuros is the Manila Cathedral having its detailed stone carvings and stained glasses   of mosaics. Fort Santiago on the other hand is the site of torture chambers and dungeons.  You can also find the beautiful San Agustin church which is now one of  the favorite venues for wedding.

During World War II, Intramuros was used by the Japanese as their garrison and prison. It was severely damaged, along with most parts of Manila, during the Allied bombings to liberate the city from Japanese occupation. The US Administration filled the moat in to prevent the onset of disease. Today a golf course takes the place of where the most once stood.

At present, Intramuros is the only district of Manila where old Spanish-era influences were retained. Much of the development of present-day Manila occurred outside the gates of Intramuros, leaving the old walls, streets and churches of Intramuros minimally touched by modernization. 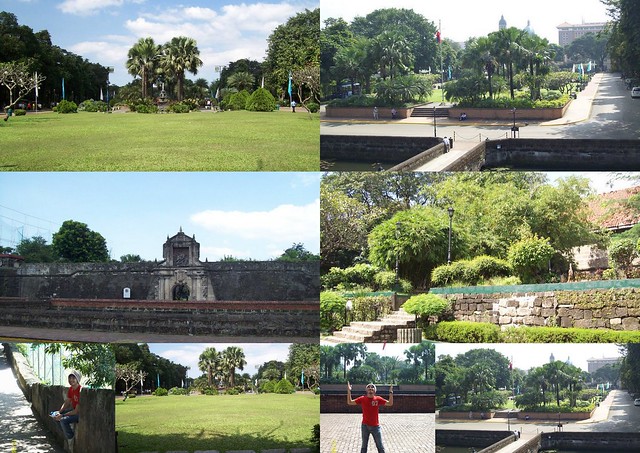 Manila is dubbed as the City of Man. Philippines capital city which reflects  the old and new look of urban life. It draws historic walled city  of Intramuros which is the Old Manila District, Malacanang Palace , The National Museum,  Rizal Park , Fort Santiago, Churches of Manila Cathedral , San Agustin and the famous Manila Bay where  you can see the spectacular view of the sunset. 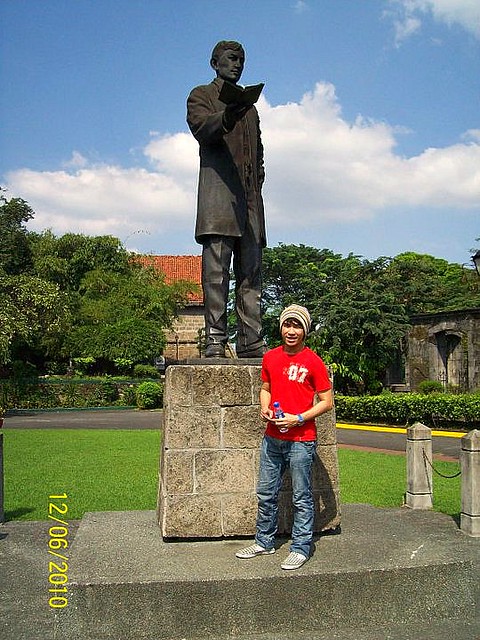 A visit to Intramuros would not be complete without spending some time looking around:

At the center of Manila’s history is Intramuros or commonly known as the Walled City which was built back in 1571 . This was served as  the spain’s political  , cultural , educational and commercial center. The site of the native settlement of Rajah Sulayman was Fort Santiago. Dubbed as the military headquarters  of spanish  , british , american and japanese during their colonial times.  Inside the Fort Santiago is the Rizal Shrine which has some of the memorabilia of our National hero Dr. Jose Rizal. The Fort is open from 8 o’clock in the morning until 6 in the afternoon. Rizal Shrine is closed on Mondays. 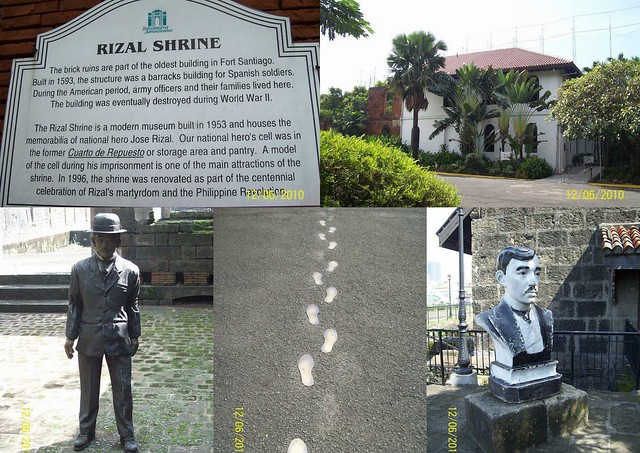 Just a walking distance away from the Fort Santiago is the city’s Plaza Mayor which is now called Plaza de Roma  which is the heart of the church and the state. That’s where you see the Manila Cathedral and Palacios del Gobernador. The Manila Cathedral is commonly known as the Basilica of the Immaculate conception and also the seat of the Roman Catholic Archdiocese of Manila.

On the other hand San Agustin can be found along the way, One of Manila’s oldest church which was constructed in year 1571 by Augustinian missionaries and now declared a UNESCO world heritage back in 1993. The church and the convent now is the headquarters  of what is said to be the priceless collections of the country religious arts and relics . It has the spanish built baroque pipe organ which was built in 1813. The Museum  is open daily from 8 o’clock in the morning and closes at 6 o’clock in the afternoon.

You will also be amazed and fascinated with the beautiful Casa Manila. It was built in 19th century . Believe me , it has the genuine and authentic  furnishings of the colonial period. The museum is located just within the Plaza San Luis Complex which showcases various  gift shops  , restaurants and art galleries. It is also open  daily from 8 in the morning and closes at 6 in the afternoon . Entrance fees may be applied. 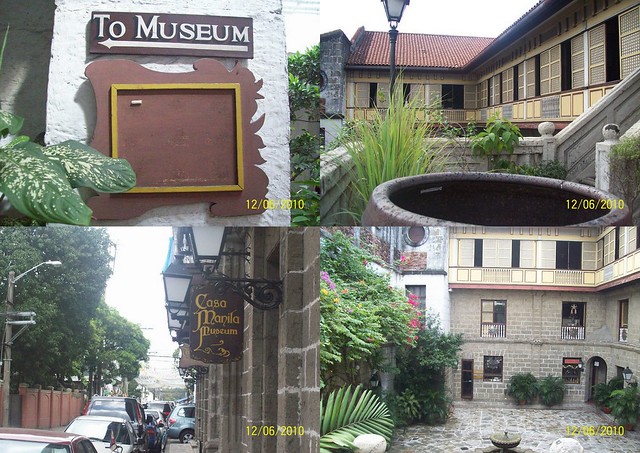 Now if you want to discover and explore the landmark of chinese influences in the walled city , visit the Puerta del Parian . Bahay Tsinoy can be found at the corner of Cabildo and Anda Streets.  The museum offers and provides cultural  and historical artifacts of chinese Filipino  or tsinoy. It has some of the historical photographs and dioramas. Museum is open from Tuesdays to Fridays from 12 in the afternoon to 4 in the afternoon and on weekends ( saturday and sunday)  it’s open from 9 in the morning and closes at 5 in the afternoon.  Entrance fees may be applied.

How to get there is very easy. You just have to take a public utility jeepney bound for pier , driving Rizal Avenue  from Caloocan City  or Quezon Boulevard from Quezon City. Get off  Sr Soriano Avenue  corner General Luna Street. Another route is to take PUJ with the Mabini Harrison signboard . Get down at the General Luna Street on the side of Puerta Real in a park called round table.

Rizal Park is well known as the Luneta Park. It is the Philippines national park which is named after our national hero Dr Jose Rizal.  He was executed  at this site by the spanish troops  in year 1896 . At the center Rizal monument can  be found which is designed by swiss sculptor named Richard Kissling in year 1912. In front of the monument is the tallest flagpole in the country  which stands 105 feet .

Interesting places here are the  Quirino Grandstand,  the scale relief map, the Manila Ocean Park, the Barbara’s , japanese garden , chinese garden, the national museum, the planetarium , a fountain lagoon, playground and also a light and sound show about Rizal’s life and other cultural and historical attractions.

Comprising the old city of Manila district are Quiapo and Sta Cruz along with the City’s Chinatown or popularly known as Binondo. These places can be found the quaint turn of the century houses and other interesting landmarks.

Visit the Bahay Nakpil Bautista on Bautista street  just near the Barbosa police precint in Quiapo. The house stands as the center of Philippines art architecture.  It is also open daily except Mondays from 9 in the morning and closes at  5 in the afternoon.

Plaza Miranda is also one of the interesting landmarks in the area. This is where you can see a lot of fortune tellers  , sidewalk vendors  who sell  religious items. Hidalgo street meanwhile is the haven for photographers while evangelista or Raon  is for electronic supplies. Now if you want to buy souvenir walk along the streets of Villalobos and Carlos Palanca which will lead you to Quinta Market or quiapo ilalim. It has fresh fruits ,meat and vegetables and some of the best handicrafts in the Philippines.

Get a fresh taste of authentic chinese cuisine and delicacies at the Chinatown or Binondo.

Now if you really want to try to look for a bargain head towards the stretch of Juan Luna street which will take you to Divisoria ,the ultimate bargain area for shopping enthusiasts.

Like any places in the world . I strongly suggest to take care of your personal belongings. Walking alone in a deserted streets or area is not suggested or recommended . Beware of  people who will offer you services or guides . If you need assistance , head towards the nearest tourism center in the area.