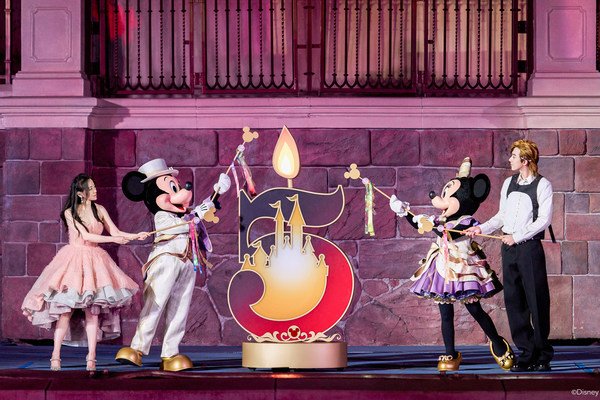 SHANGHAI, June 16, 2021 /PRNewswire/ — On June 16, 2016, Shanghai Disney Resort first opened its gates to the public, and began delivering an array of magical experiences in an incredible destination "where dreams come true." The historic milestone is also a celebration of the successful partnership between the resort’s two shareholders – Shanghai Shendi Group and The Walt Disney Company – with support from the local government, community friends, guests and fans. Today, on the eve of its Fifth Anniversary, Shanghai Disney Resort continued its year-long celebration with a series of special activities, including the premiere of a brand new in-park theatrical show – "Mickey’s Storybook Adventure", a star-studded red carpet event, and a special evening ceremony in front of the Enchanted Storybook Castle that featured the debut of the resort’s new anniversary theme song "What a Beautiful Surprise". 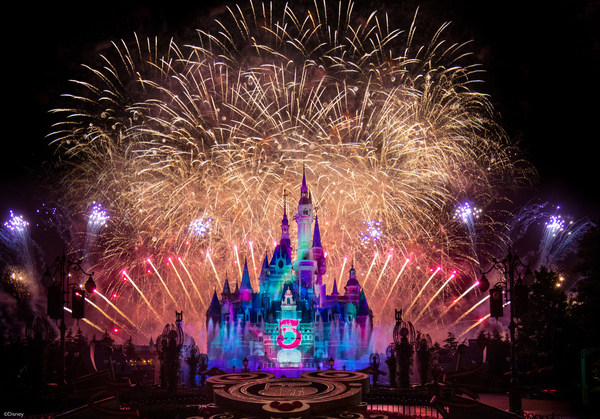 "In building Shanghai Disney Resort, we wanted it to be both authentically Disney and distinctly Chinese, and it has been wonderful to see the park embraced by the people of China as it’s quickly become one of the most popular tourist destinations globally," said Bob Iger, Executive Chairman, The Walt Disney Company. "The park represents a tremendous achievement, and we are so proud of the tens of thousands of dedicated and talented people who have worked together to create a place unlike any other in the world."

"Since opening Shanghai Disney Resort in June 2016, we have been delighted by the enthusiastic response from the millions of people who have visited the park," said Bob Chapek, Chief Executive Officer, The Walt Disney Company. "As we celebrate this milestone, we are incredibly grateful to our outstanding Cast Members who bring the park to life and create unforgettable experiences for our guests, and we look forward to continuing to enhance this extraordinary destination through the magic of our storytelling and innovation in the years ahead."

"Since the opening of Shanghai Disney Resort, the two shareholders have continuously created magic together by combining global standards with the best local practices. Through mutual trust, communications and integration, we have worked together to build this leisure and resort destination for citizens and tourists," said Yang Jinsong, Chairman of Shanghai Shendi Group. "We appreciate everyone who has contributed to the development and operation of the resort, as well as all of our guests. We will continue to deliver high-quality resort offerings and happy experiences for years to come, and we look forward to an even brighter future with continued cooperation."

Five years of magic and happiness

In less than five years, Shanghai Disney Resort has become one of the world’s most popular tourist destinations. Built around the unique design philosophy of authentically Disney and distinctly Chinese, the resort pays tribute to China by incorporating Chinese elements and art into every facet, including its attractions, entertainment, architecture, food and beverage, merchandise, and its daily operations.

The resort has gone on to score extremely high guest satisfaction ratings since its opening by remaining nimble, listening to guests and quickly adapting to their feedback, while also delivering innovative, high-quality content that incorporates cutting-edge technology to enhance the brand’s storytelling and further elevate the guest experience for all.

Over the past five years, Shanghai Disney Resort has had a profoundly positive impact on the local community and economic development in the region. Since its Grand Opening, Shanghai Disney Resort has become a major employer in Shanghai, currently employing more than 12,000 Cast Members. With the resort continuing to expand and develop in the years to come, it will generate many more employment opportunities at all levels, and as an ultra-large scale tourism destination, the resort’s opening and subsequent expansion has positively impacted multiple other industries. By sharing Disney’s best industry practices developed over more than 65 years of experience in the theme park industry, Shanghai Disney Resort has raised the bar across multiple disciplines, including tourism, accommodation, dining, culture and creativity, among others.

One of the key reasons behind Shanghai Disney Resort’s incredible success over the past five years has been its Cast. Since 2016, Cast Members across the resort have created memorable, magical experiences for guests from around the world. They make the difference in a guest’s visit and all of them, whether on stage or backstage, share a common passion for creating happiness and memories that will last a lifetime.

When Shanghai Disneyland reopened its gates on May 11 last year, it brought a much needed boost of happiness and optimism to the world. Once more, the park was able to witness the happiness and laughter of guests enjoying the magic of Disney, providing hope and inspiration to all. This was made possible by working around the clock to develop operational policies and methods that would help protect Cast and Guests, and these new standards helped rebuild people’s confidence in the recovery of the tourism industry.

New surprises continue with the premiere of Mickey’s Storybook Adventure

As part of the resort’s ongoing Year of Magical Surprises, Shanghai Disneyland today debuted a new in-park theatrical show – "Mickey’s Storybook Adventure" at its Walt Disney Grand Theatre. Set to officially open to all Shanghai Disneyland park guests on June 16, 2021, this dazzling show is the latest in a long line of new experiences that have been added to the resort over the last five years. Featuring one of the largest numbers of on-stage performers of any indoor entertainment show at Shanghai Disneyland and utilizing state-of-the-art technologies as well as classic Disney storytelling, the new Broadway-caliber show fully immerses guests in the emotion and fun of Disney stories and characters with a unique combination of music, live performances, animation and imaginative scenery. 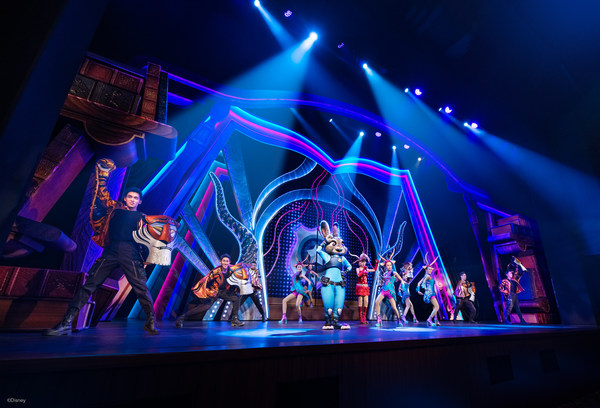 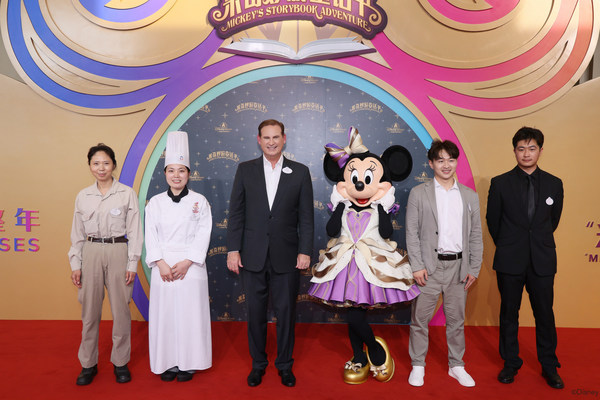 As night fell, a grand anniversary celebration was held at Shanghai Disneyland to thank all those who were instrumental in bringing the resort to life over the years, including members of the local government, partners, community friends, guests, fans and Cast Members. A special ceremony was hosted in front of the Enchanted Storybook Castle, inviting everyone to celebrate the success of the past five years and welcome in a new era for the resort.

The high-energy song "What a Beautiful Surprise" was co-written by experienced Disney songwriters Jordan Powers, Jason Mater and Tony Ferrari, who have created many well-known songs for Disney parks and Disney musicals, and co-produced by K-Kov, a Grammy-award-nominee, and Yaron Spiwak, a Disney Imagineer who also produced music for Shanghai Disneyland’s new nighttime spectacular – ILLUMINATE! A Nighttime Celebration. Starting June 16, Shanghai Disneyland guests will be able to enjoy the song after ILLUMINATE! A Nighttime Celebration, as a magical conclusion to their visit to the park. Beginning at midnight on the evening of June 15, the song will be available on major online music platforms, including on QQ Music, Kugou Music, Kuwo Music, NetEase Music, Migu Music and Apple Music.

With the resort continuing to celebrate its 5th Birthday, it will continue increasing its strategic investment, bringing more exciting celebrations, exclusive offerings and enhanced new experiences for guests in order to further elevate the already exceptional guest experience.

Later this summer, the resort and its corporate alliance partners will begin launching Super Brand Months to deliver additional birthday surprises for guests during their visit. Starting in June, each month will see one of the resort’s alliance partners including Pepsi, Dole, Energy Monster, SAIC General Motors, Citizen, China Eastern Airlines, Vanke and more work together with the resort to deliver new and exciting signature products and experiences.

As the 5th Birthday Celebration continues, Shanghai Disney Resort will unveil more themed seasonal takeovers, with each season promising to deliver new festivities, decorations, entertainment, themed food and beverages, as well as amazing merchandise items, to create even more unforgettable memories for guests to enjoy with each visit.

Shanghai Disney Resort will continue to bring new character experiences for guests and fans. Later this year the resort will welcome the arrival of another beloved friend of Duffy who will make their world debut at Shanghai Disney Resort, adding more new and unique events, entertainment, merchandise, dining offerings and special surprises, for both fans and guests.

Since Shanghai Disney Resort first opened its gates, it has consistently searched for new and innovative ways to enhance the guest experience and expand on the number of park offerings available.  As one of the highlights of the resort’s guest experience enhancement plan, guests visiting Disneytown will be able to take advantage of new experiences when SoReal, China’s leading virtual reality company, begins providing guests with tailored and cutting edge digital entertainment experiences.

As an ever-changing destination committed to keeping experiences exciting and new, Shanghai Disney Resort will continue its growth and expansion in the years to come, including through the highly anticipated eighth themed land at Shanghai Disneyland inspired by the Academy Award-winning film Zootopia. Construction continues to progress in the park’s upcoming themed land that will feature new entertainment, merchandise, food and beverage offerings and a major new attraction that seamlessly blends Disney’s storytelling and state-of-the-art technologies when it opens. Audio-Animatronics figures of some of the leading characters from the story are also under development, with some of them, such as the three-meter-tall Polar Bear from Tundratown, and Yax the yak from Mystic Spring Oasis, being developed in the show production center at Shanghai Disney Resort. This is the first time that Walt Disney Imagineering has built such complex Audio-Animatronics figures outside of the United States. In addition, the first tree of Zootopia was planted this morning.

With the Year of Magical Surprises just getting started, there are plenty more announcements and surprises set to be unveiled throughout 2021 and beyond.