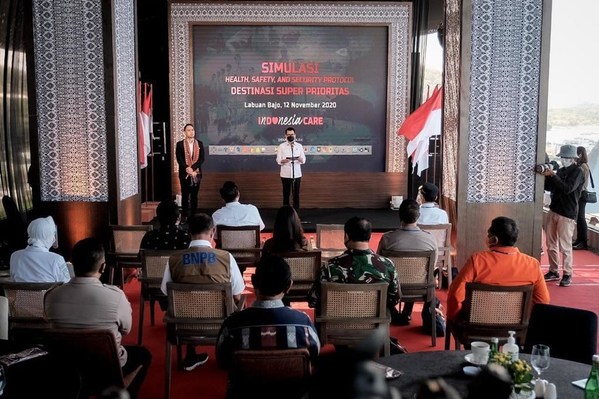 LABUAN BAJO, Indonesia, Nov. 13, 2020 /PRNewswire/ — The Ministry of Tourism and Creative Economy / the Tourism and Creative Economy Agency (Kemenparekraf), supported by 23 ministries and institutions, held a simulation of the 3K protocol (health, security, and safety) for national tourism destinations as the last series of programs for the preparation and implementation of a health protocol.

Menparekraf Wishnutama Kusubandio delivering his speech prior to the "3K Protocol Simulation for National Tourism Destinations" at Labuan Bajo, November 12, 2020.

"In accordance with President Joko Widodo’s direction, there should be a new strategy for tourism, so that after we go through this pandemic our tourism will be even better than before. In the future, the tourism strategy must be more comprehensive and integrated," said Menparekraf Wishnutama Kusubandio.

Also attending this activity was President Joko Widodo who delivered a virtual speech.

The Coordinating Minister for Maritime Affairs and Investment Luhut Binsar Panjaitan appreciated the simulation activity that collaborated with 23 ministries / agencies. This simulation is a trial of an integrated system that became the forerunner of the SOP (Standard Operational Procedure) in the field of health, security, and safety of Indonesian tourism destinations.

This activity, which has been carried out with good teamwork, will also show the world that Indonesia is better prepared to maintain the safety and security of tourists.

Meanwhile, President Joko Widodo in his remarks virtually said that for the first time, Indonesia will have an integrated health, safety, and security system. The first destination that will be the starting point is Labuan Bajo. Later, the protocol will be implemented in 10 other priority tourism destinations.