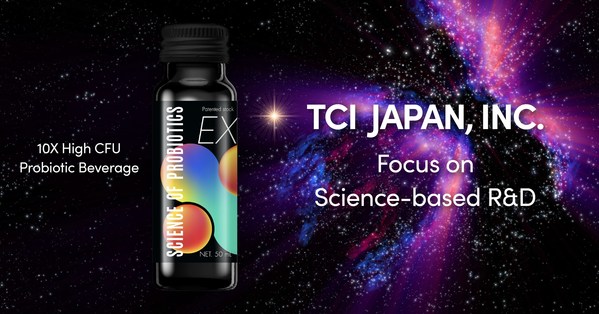 TAIPEI, June 25, 2021 /PRNewswire/ — To keep enough probiotics alive in products, sellers and consumers must meet the storage conditions, especially storage temperature. Since most live probiotics can only survive in a low-temperature environment, most probiotic products, especially lactic acid bacteria beverages, are required to be refrigerated from the time they are produced until they are consumed. Besides, these beverages usually only have a short shelf life of about 2 weeks. Nevertheless, after 20 years of research and development, TCI JAPAN’s SCIENCE OF PROBIOTICS finally broke through the existing limitations and found new ways to create quality probiotic beverages with high CFU counts that can be safely stored at room temperature.

TCI Japan’s SCIENCE OF PROBIOTICS is the first in the industry to announce its development of a new patented process where high-efficiency fermentation technology is used to infuse into each tiny glass bottle of drink with 100 billion live probiotics, roughly equal to the total probiotic count in ten bottles of common lactic acid bacteria drinks. Moreover, using its cutting-edge technology, high counts of live cultures can be kept alive in the drinks for 18 months even at room temperature. This epoch-making technological innovation not only solves sellers’ difficulties in probiotic storage but enables consumers to enjoy high-potency, quick-acting and long-acting probiotic beverages. In the modern age with increasing consumer awareness, Japan takes the lead in the health food industry in Asia and has successfully utilized scientific research and development to make truly good products.