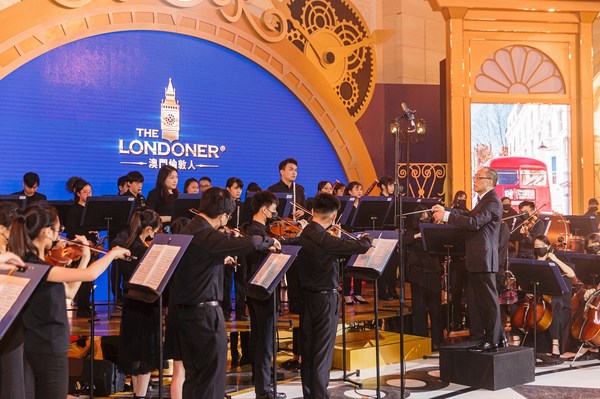 The Macau Youth Orchestra performs at the opening ceremony for the first-phase launch of The Londoner Macao Monday at the integrated resort’s Crystal Palace atrium. The Londoner Macao is Sands China’s bold British-themed reimagining of the Sands Cotai Central integrated resort, and offers the best of British history and culture alongside a traditional yet contemporary hospitality experience. 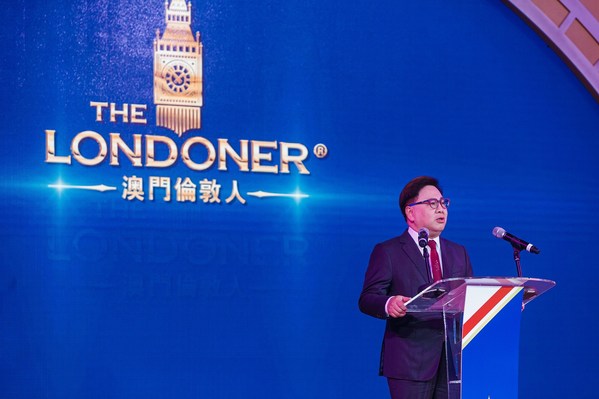 Sands China Ltd. President Dr. Wilfred Wong speaks at the opening ceremony for the first-phase launch of The Londoner Macao Monday at the integrated resort’s Crystal Palace atrium. The Londoner Macao will continue to open progressively throughout 2021. 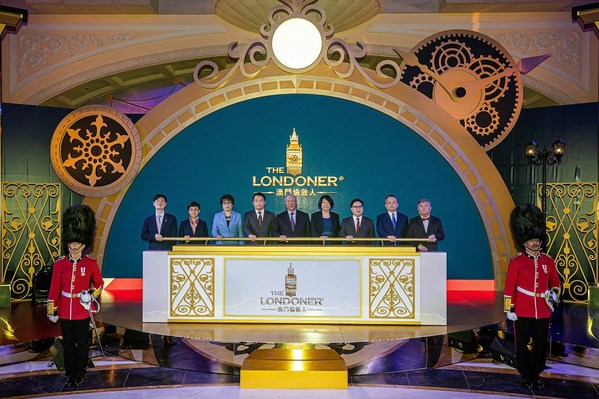 Guests of honour officiate the opening ceremony for the first-phase launch of The Londoner Macao Monday at the integrated resort’s Crystal Palace atrium.

An artist’s rendering shows the exterior of The Londoner Macao, which opened its first phase Monday. Opening progressively throughout the year, coming attractions include the imposing Houses of Parliament facade and life-size 96-metre Elizabeth Tower, featuring a replica of the famous Big Ben clock face, which will welcome guests with its accurate rendition of the classic bell chimes.

The Londoner Macao is Sands China’s bold British-themed reimagining of the Sands® Cotai Central integrated resort. Offering the best of British history and culture alongside a traditional yet contemporary hospitality experience, The Londoner Macao will continue to open progressively throughout 2021.

A highlight of Monday’s opening event was the venue itself – the ornate and elegant main lobby, dubbed the Crystal Palace. Designed in classic Victorian style, the glass and iron atrium features a 33-metre-high stained-glass ceiling that bathes the lobby in sunlight during the day and provides a panoramic view of the night sky after dark. Victorian-era lampposts line the patterned dark marble floor, whose centrepiece is the full-scale Shaftesbury Memorial Fountain featuring Anteros, the Greek god of selfless love, on its pinnacle.

Dr. Wilfred Wong, president of Sands China Ltd., said: "We believe The Londoner Macao, like The Venetian and The Parisian before it, will become an instant, iconic landmark in Macao. It is evidence of Mr. Adelson’s unwavering vision for the development of Sands China and the company’s commitment to invest in Macao. As a company firmly rooted in Macao, Sands China is proud to unveil The Londoner Macao as part of our continuing contribution to the transformation of Macao into a world centre of tourism and leisure. Our sincere thanks go to the Central People’s Government of the People’s Republic of China and the Macao SAR government for their continued leadership and support, and to all our community partners for their cooperation and collaboration through the years."

In addition to the Crystal Palace, the first-phase launch features new dining options, interactive London-themed attractions, and the opening of The Londoner Hotel – an all-suite tower featuring approximately 600 luxury suites.

Beckham commented: "The Londoner Macao is another exceptional property by Sands. Everything has been created so guests have the best experience possible and the attention to detail is like no other. This integrated resort feels very personal to me and being part of the development has been an incredible project – not only is it bringing my home town to Macao, but also the first David Beckham Suites. I can’t wait to be back in Macao to see it all – it looks spectacular."

The 65-member Macau Youth Orchestra performed at Monday’s ceremony, as did the Sands China Choir, who sang an acapella rendition of one of the most recognisable British tunes of the last century, Queen’s operatic rock hit Bohemian Rhapsody.

The event also featured a video tribute in honour of company founder Sheldon G. Adelson, who passed away last month.

Representing an investment of US$1.9 billion (MOP 15.2 billion), The Londoner Macao will introduce additional integrated resort offerings progressively throughout 2021, including the Suites by David Beckham; Londoner Court, a luxury residential-style all-suite hotel; the rethemed Shoppes at Londoner; and the Londoner Arena.

Sands China Ltd. (Sands China or the Company) is incorporated in the Cayman Islands with limited liability and is listed on The Stock Exchange of Hong Kong Limited (HKEx: 1928). Sands China is the largest operator of integrated resorts in Macao. The Company’s integrated resorts on the Cotai Strip comprise The Venetian® Macao, The Plaza® Macao, The Parisian Macao and The Londoner® Macao. The Company also owns and operates Sands® Macao on the Macao peninsula. The Company’s portfolio features a diversified mix of leisure and business attractions and transportation operations, including large meeting and convention facilities; a wide range of restaurants; shopping malls; world-class entertainment at the Cotai Arena, The Venetian Theatre, The Parisian Theatre, the Londoner Theatre and the Sands Theatre; and a high-speed Cotai Water Jet ferry service between Hong Kong and Macao. The Company’s Cotai Strip portfolio has the goal of contributing to Macao’s transformation into a world centre of tourism and leisure. Sands China is a subsidiary of global resort developer Las Vegas Sands Corp. (NYSE: LVS).

About The Londoner® Macao

The Londoner® Macao is an integrated resort that invites visitors on a journey through the best of British history and culture. It incorporates five celebrated hotel brands – the new The Londoner Hotel and Londoner Court, alongside existing Conrad Macao, Sheraton Grand Macao and The St. Regis Macao. The Londoner Macao will present visitors to Cotai with an expanded offering of affordable luxury available nowhere else in Macao, with over 6,000 hotel rooms and suites, and 1.2 million square feet (111,000 square metres) of retail, entertainment, dining and meetings and convention space. With over 150 retail outlets, Shoppes at Londoner joins Shoppes at Venetian and Shoppes at Four Seasons, alongside Shoppes at Parisian. Together they offer a selection of approximately 850 luxury duty free stores – the most in any one single location in Macao. With three spas, four health clubs and over 365,000 square feet (34,000 square metres) of uniquely themed gaming space, The Londoner Macao provides a new level of luxury and accessibility to the Cotai Strip.