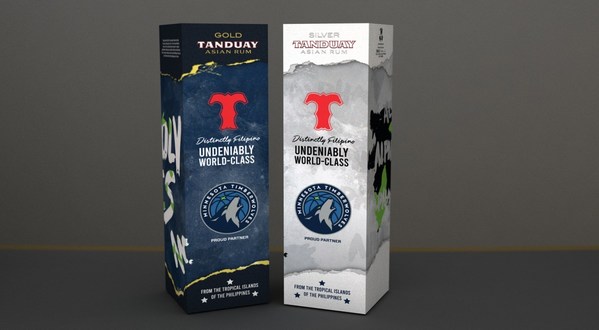 MINNEAPOLIS, Feb. 11, 2021 /PRNewswire/ — Top Philippine rum-maker Tanduay has recently partnered with the Minnesota Timberwolves as it expands its market in the Midwest. The rum company made the announcement less than two weeks after revealing its partnership with another National Basketball Association (NBA) team, the Milwaukee Bucks.

Tanduay Distillers has inked a partnership with the Minnesota Timberwolves. As part of the deal, they are releasing a co-brand packaging of Tanduay Rum products for the fans.

“As a global brand, we love bringing the world closer together, having fans experience flavors or products they haven’t tried before and offer something we know they’ll love,” said Ryan Tanke, Chief Operating Officer of the Minnesota Timberwolves and the Minnesota Lynx. “It’s an honor to partner with the world’s top-selling rum. A strong heritage is key to building loyal fans and it’s a shared value within our brand cultures.”

Tanduay, which is celebrating its 167th founding anniversary this 2021, has been declared the World’s Number 1 Rum by Drinks International for three consecutive years.

“We are proud to welcome one of the NBA’s most dynamic teams to the Tanduay family. Like them, we work hard in giving the best to our consumers and we are excited to build awareness of Tanduay among their fans,” Tanduay President and COO Lucio Tan III said.

Since assuming the leadership of Tanduay Distillers, Tan has strategically positioned the company’s expansion to the US. With this, he has further intensified the company’s distribution, digital marketing, and sports marketing efforts, among others.

Tanduay is the only Philippine brand to have partnered with NBA teams as part of its international marketing efforts. Apart from the Minnesota Timberwolves, it has partnerships with the Golden State Warriors, Brooklyn Nets, and Milwaukee Bucks.

“Tanduay is a company with a strong heritage. What we are finally bringing to the world stage is the craftsmanship that comes with the products Tanduay perfected for more than a century. Our partnerships with these NBA teams such as the Timberwolves promotes the pride of the Philippines’ sugarlandia to strategic markets,” Tan said.

Founded in 1854, Tanduay is one of the Philippines’ most beloved and iconic brands. It has a long tradition of quality craftsmanship. Its rums are made from quality sugarcane sourced from one of the country’s sugar capitals, Bacolod, and are distilled in its own distilleries in Luzon, Visayas, and Mindanao.

Throughout the years, it has received honors and recognitions from top wines and spirits organizations and competitions. In 2020 alone, it was awarded “Brand of the Year” in the rum category by the Global Advisory Council of the World Branding Forum for the sixth consecutive year and bagged top honors in China’s G100 International Wine & Spirits Awards; the Ultimate Spirits Challenge; Beverage Testing Institute; and Concours Mondial.