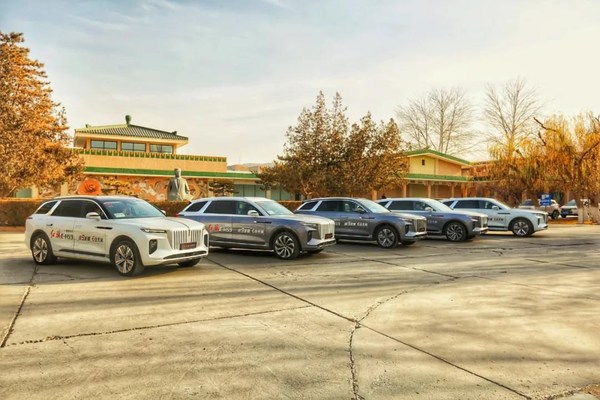 During the celebration ceremony for completing the journey, Hongqi inked a strategic cooperation agreement with Dunhuang Academy, a leading institution in the field of cultural relics in China and responsible for the conservation, management, and research of the millennium-old and UNESCO World Heritage Site Mogao Grottoes. Under the agreement, the two parties would co-build national culture IP while jointly developing cultural and creative products, and launch co-branded cars while deriving new forms to pay tribute to classics.

Embarking right after its official debut at the 2020 Boao Forum for Entrepreneurs earlier in December 2020, the journey was dubbed “a tribute to China” and ran across Shenzhen, Guiyang, Wuhan, Xi’an, and Dunhuang – five cities marked out to mirror the country’s development speed, ecological wisdom, confidence and unity, aesthetic root, and cultural legacy.

As a new family member and the very first luxury e-SUV model of Hongqi, the new E-HS9 presents the brand’s own story of speedy growth as well as a development philosophy of bold innovation upon inheritance. It boasts traditions such as the logo of its vintage classic CA72 model and palace lantern style tail lights, which fit naturally with modern and smart designs such as one-piece surround screen, AR real-scene navigation, smart sensor steering wheel, autopilot system, and L3+ automatic parking.

The journey itself not only enriches what “Hongqi” stands for, but strengthens the message that the brand is communicating to its customers, the China FAW Group said.

The sales of Hongqi, the iconic brand of China’s leading automaker China FAW Group, reached record high this year, with the number of vehicles manufactured and sold both exceeding 200,000 units as of December 25.

Founded in 1953 in Changchun, capital of Jilin Province in northeast China, China FAW Group is regarded as the cradle of China’s auto industry.