ZeroAvia’s achievement is the first step to realising the transformational possibilities of moving from fossil fuels to zero-emission hydrogen as the primary energy source for commercial aviation. Eventually, and without any new fundamental science required, hydrogen-powered aircraft will match the flight distances and payload of the current fossil fuel aircraft.

This major milestone on the road to commercial zero-emission flight is part of the HyFlyer project, a sequential R&D programme supported by the UK Government and follows the UK’s first ever commercial-scale battery-electric flight, conducted in the same aircraft in June. ZeroAvia will now turn its attention to the next and final stage of its six-seat development program – a 250-mile zero emission flight out of an airfield in Orkney before the end of the year. The demonstration of this range is roughly equivalent to busy major routes such as Los Angeles to San Francisco or London to Edinburgh.

Val Miftakhov, CEO, ZeroAvia comments: "It’s hard to put into words what this means to our team, but also for everybody interested in zero-emission flight. While some experimental aircraft have flown using hydrogen fuel cells as a power source, the size of this commercially available aircraft shows that paying passengers could be boarding a truly zero-emission flight very soon. All of the team at ZeroAvia and at our partner companies can be proud of their work getting us to this point, and I want to also thank our investors and the UK Government for their support."

Aviation Minister Robert Courts said: "Aviation is a hotbed of innovation and ZeroAvia’s fantastic technology takes us all one step closer to a sustainable future for air travel. Through our ground-breaking Jet Zero partnership we’re working hard with industry to drive innovation in zero carbon flight, and we look forward to seeing the sector go from strength to strength."

Business and Industry Minister Nadhim Zahawi said: "Developing aircraft that create less pollution will help the UK make significant headway in achieving net zero carbon emissions by 2050. Backed by Government funding, this flight is another exciting milestone in ZeroAvia’s project. It shows that technologies to clean up air travel are now at our fingertips – with enormous potential to build back better and drive clean economic growth in the UK."

ZeroAvia’s innovation programme in the UK is part-funded through the UK Government’s Aerospace Technology Institute (ATI) Programme. Through the HyFlyer project, ZeroAvia is working with key partners the European Marine Energy Centre (EMEC) and Intelligent Energy to decarbonise medium-range small passenger aircraft by demonstrating powertrain technology to replace conventional engines in propeller aircraft. Intelligent Energy will optimise its high power fuel cell technology for application in aviation whilst EMEC, producers of green hydrogen from renewable energy, will supply the hydrogen required for flight tests and develop a mobile refuelling platform compatible with the plane.

Recently, ZeroAvia was also invited by Prime Minister Boris Johnson to join the UK’s JetZero Council and help lead the UK towards the ambitious goal of achieving the first ever zero emission long haul passenger flight.

Gary Elliott, CEO of the Aerospace Technology Institute, said: "This is an important milestone for HyFlyer and UK aerospace, and we send our congratulations to the team. It is through supporting projects such as HyFlyer, and new and innovative companies such as ZeroAvia, that the ATI aims to deliver our vision for future sustainable aviation and secure a lead for UK aerospace in the highly-competitive global market."

In addition to all the aircraft work, ZeroAvia and EMEC have developed the Hydrogen Airport Refuelling Ecosystem (HARE) at Cranfield Airport – a microcosm of what the hydrogen airport ecosystem will look like in terms of green hydrogen production, storage, refuelling and fuel cell powered-flight. This also marks another world’s first – a fully operational hydrogen production and refueling airport facility for primary commercial aircraft propulsion.

The successful flight represents good news for the aviation industry’s role in supporting the net zero transition, but also raises hopes for innovation that can reduce commercial challenges in the medium term, particularly important for the industry as it considers the post pandemic recovery. ZeroAvia’s hydrogen-electric powertrain is projected to have lower operating costs than its jet-fuelled competition due to lower fuel and maintenance costs. The company plans to control hydrogen fuel production and supply for its powertrains, and other commercial customers, substantially reducing the fuel availability and pricing risks for the entire market.

About ZeroAvia:
ZeroAvia is a leader in zero-emission aviation, focused on hydrogen-electric aviation solutions to address a variety of markets, initially targeting 500 mile range in 10-20 seat aircraft used for commercial passenger transport, package delivery, agriculture, and more. Based in London and California, ZeroAvia has already secured experimental certificates for its two prototype aircraft, passed significant flight test milestones, and is on track for commercial operations in 2023. The company’s expanding UK operations are partially supported by the grant from UK’s Aerospace Technology Institute and Innovate UK, and ZeroAvia is part of the UK Government’s Jet Zero Council. For more, please visit ZeroAvia.com, follow @ZeroAvia on Twitter, Instagram, and LinkedIn.

HyFlyer will demonstrate a phased approach from battery power to hydrogen power, integrating the new technology aboard a Piper M-class aircraft,  which will perform initial test flights out of Cranfield and culminate in a 250 – 300 nautical mile (NM) demonstration flight out of an airfield in Orkney.

The project is led by ZeroAvia with project partners the European Marine Energy Centre (EMEC) and Intelligent Energy.

The HyFlyer project is supported by the ATI Programme, a joint Government and industry investment to maintain and grow the UK’s competitive position in civil aerospace design and manufacture. The programme, delivered through a partnership between the Aerospace Technology Institute (ATI), Department for Business, Energy & Industrial Strategy (BEIS) and Innovate UK, addresses technology, capability and supply chain challenges. 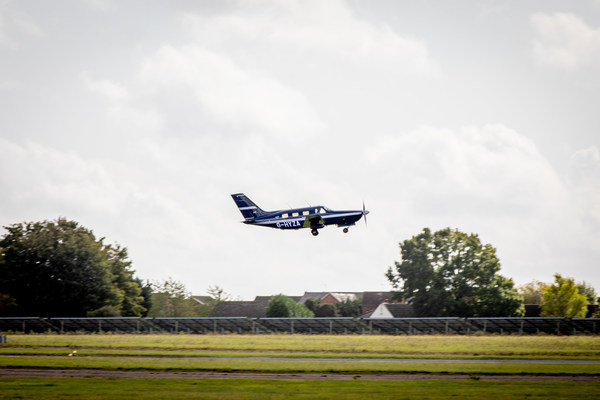